Around a month ago NVIDIA announced they would be bringing Resizable BAR support to their RTX 30 Series laptop parts as well as desktop RTX 30 Series and with their GeForce Game Ready Driver 461.72 they have done just that. But for now, it is a bit limited with only the mobile SKUs supported and a single desktop part, the RTX 3060.

In short Resizable BAR removes the tight restriction on the amount of data that can flow between the CPU and the GPU Memory and can sometimes allow for substantial performance increases. Resizable BAR grew in popularity and recognition when AMD implemented Smart Access Memory when you paired a Ryzen 5000 Series CPU and a 500 Series Chipset with an RX 6000 Series GPU. The biggest differentiator here between AMDs implementation and NVIDIAs is that the NVIDIA support for ReBAR (Resizable BAR) is that it's supported on many more platforms.

In fact, NVIDIA has extended support for ReBAR to even PCIe Gen 3.0 platforms by supporting Intel's 10th Gen Core Series CPUs with the 400 Series Chipsets that are already available. Interestingly enough on AMDs CPUs support only includes the Zen 3 Ryzen 5000 Series indicating that there's more to it indeed than just toggling a switch, but they do show support for even the 400 Series Chipset motherboards so long as the BIOS has support. 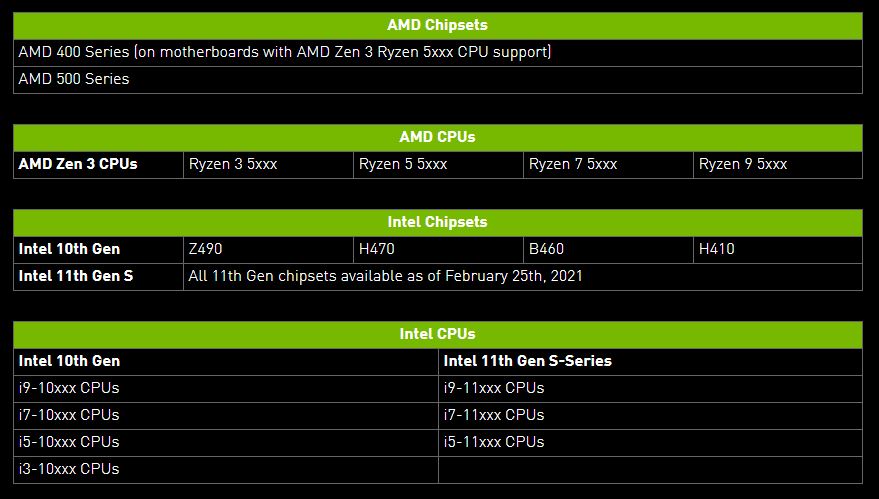 One of the interesting moves with NVIDIAs addition of Resizable-BAR support is that they're being selective on what games are given support and that's being done through the drivers. Why is that you ask? Well for example in tests done by Hardware Unboxed we've seen where AMD's implementation of Smart Access Memory can sometimes lead to no performance benefit or even performance degradation. Currently, the list is rather limited but is expected to grow quickly as we see the support expand to other cards. Games supported are;

NVIDIA limiting the game support at launch may have seemed like an odd one, but it does seem that they are looking to roll out support for games that only benefit from the feature. In our results, we saw between a 4-11% increase in performance, something often not even achieved by a heavy overclock. This is a welcome result and the fact that it's going to be updated through drivers and have the games whitelisted means you will not have to be concerned about whether a game loses performance because of the resizable bar feature being enabled in the BIOS.

The support for Resizable BAR on much higher-end cards will be obviously attractive but at this more (albeit right now is a bad time to say this) affordable price segment is where things really get to shake up from tech like this. Combinations of Resizable BAR, Mesh Shaders, VRS, and even DLSS can really transform the expectations of the more midrange offerings. When the dust settles from availability woes I have a feeling that things like Smart Access Memory and Resizable BAR will need to be shown in performance comparisons because they're often too big to ignore for those making purchases.

The drilling down of performance in the graphics cards space is becoming exponentially more complicated these days with all of the great new features coming to all DX12 Ultimate compliant GPUs that it's becoming quite exciting, so long as we can actually buy them.