NVIDIA's board partners have started unveiling the updated GeForce GTX 1080 and GeForce GTX 1060. Cards from ASUS and MSI have been pictured and will be shipping out to consumers in mid April.

As of right now, ASUS and MSI have posted pictures of their updated designs for the GTX 1080 and GTX 1060 models featuring higher clocked memory. The GeForce GTX 1080 will be using faster 11 Gbps G5X while the GeForce GTX 1060 would utilize the fastest G5 memory currently available. While higher clocks on memory don't necessarily boost gaming performance by a whole lot, the update will come at the same price point and lower in the case of GTX 1080 which now retails at $499 US. 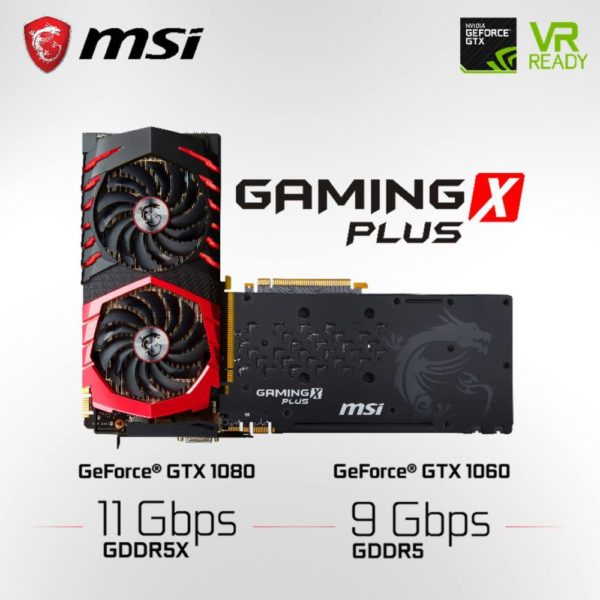 At the end of the day, gamers and enthusiasts will benefit from slightly better performance without the need to pay extra. The new memory would also overclock better, resulting in good bandwidth boost, especially for the GTX 1060 which currently ships with a bandwidth of 192.2 GB/s. The new memory chips would boost that too 216 GB/s while the GTX 1080 would deliver 352 GB/s bandwidth which is also a nice increase.

The first update is for the GeForce GTX 1080 which was NVIDIA’s flagship GeForce offering before the 1080 Ti launch. This card was launched last year and more details on that could be seen here. NVIDIA launched the card at $699 US for the Founders Edition and $599 US for custom variants. A year later, NVIDIA will be offering a price update and will sell the card for just $499 US which is impressive.

The actual clock speeds are maintained at 1607 MHz base and 1733 MHz boost but the FinFET architecture allows for extreme overclocking as demoed at the event. The chip features 8 GB of GDDR5X (next-gen) memory featured across a 256-bit bus. Aside from the price update, the card will also recieve an updated memory architecture in the form of faster G5X memory. The new chips will operate at 11 GB/s, delivering bandwidth of 352 GB/s. This is a nice boost over the 320 GB/s which shipped as reference.

The GeForce GTX 1060 is receiving an update in the form of faster memory across all models. The new GeForce GTX 1060 models will be shipping with 9 GB/s GDDR5 chips that compared to 8 GB/s, deliver 216 GB/s bandwidth. This is faster than the 192.2 GB/s on the original variants and we can also see some AIB specific price adjustments on the new models too. The ASUS GeForce GTX 1060 DirectCU II listing can be found here.

Overall, these announcements made by NVIDIA mean that they have made their GeForce Gaming brand accessible to a wide spectrum of gamers. With high-performance products and amazing prices across the board, we can expect the competition to heat up as AMD is also preparing slightly updated models of the Polaris GPU for an April launch. We will also be covering the GeForce GTX 1080 Ti custom models in a future post soon.