NVIDIA GeForce GTX 1080 and GeForce GTX 1070 price cuts are officially live at several retailers around the globe. The new price cuts were announced during NVIDIA's GDC 2017 keynote where the company also unveiled their flagship GeForce, the GTX 1080 Ti.

The GeForce GTX 1080 and GeForce GTX 1070 were the first NVIDIA Pascal based consumer offerings. The cards launched in May 2016 and have served almost a year, capturing the interest of enthusiasts and high end gamers. NVIDIA announced at GDC 2017 that these cards will be getting a price cut along with update for the GTX 1080 and GTX 1060.

The price cuts on these two graphics cards are now live and we found some really interesting deals at the various retail sites. NVIDIA also has a game bundle promotion going on so every GTX 1080 and GTX 1070 purchase gets you a copy of either Ghost Recon: Wildlands or For Honor. That adds $60 to the value of these cards which is a superb deal for builders upgrading to either of the two cards. 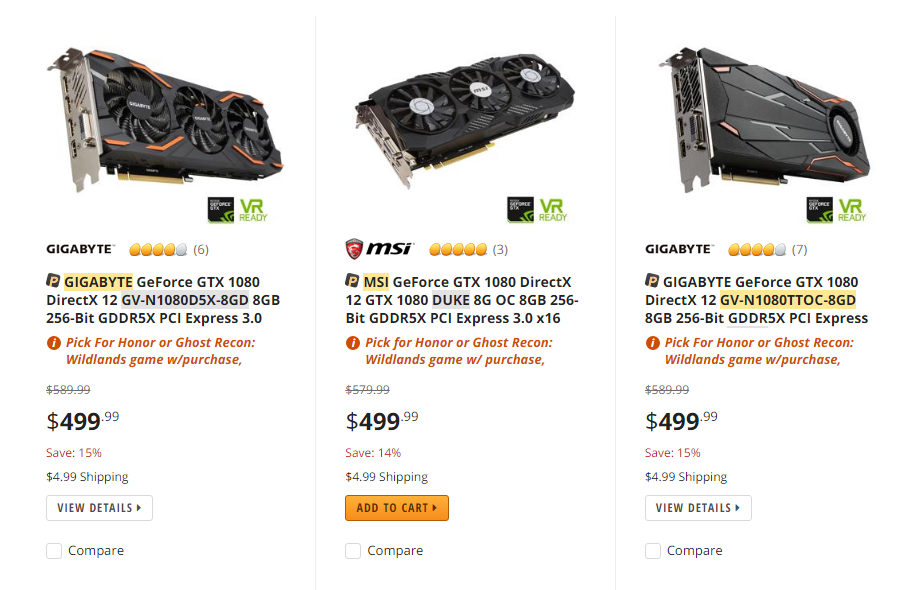 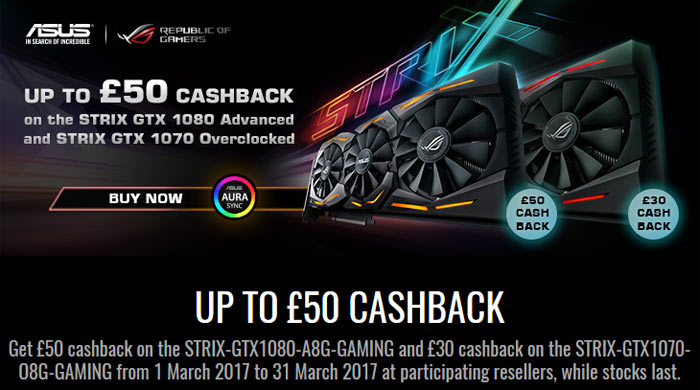 Following are the retailers who have applied the ASUS cashback promotions on STRIX GeForce GTX 1080 and GeForce GTX 1070 graphics cards:

The first update is for the GeForce GTX 1080 which was NVIDIA's flagship GeForce offering before the 1080 Ti launch. This card was launched last year and more details on that could be seen here. NVIDIA launched the card at $699 US for the Founders Edition and $599 US for custom variants. A year later, NVIDIA will be offering a price update and will sell the card for just $499 US which is impressive.

The actual clock speeds are maintained at 1607 MHz base and 1733 MHz boost but the FinFET architecture allows for extreme overclocking as demoed at the event. The chip features 8 GB of GDDR5X (next-gen) memory across a 256-bit bus. Aside from the price update, the card will also receive an updated memory architecture in the form of faster G5X memory. The new chips will operate at 11 GB/s, delivering bandwidth of 352 GB/s. This is a nice boost over the 320 GB/s which shipped as reference.

The second update is aimed at the GeForce GTX 1070 in the form of another price cut. The GeForce GTX 1070 was already the most stellar value to performance ratio card and the price cut to $349 US makes it even better. The card is faster than the competitors flagship product and comes in several custom design products. The card was originally priced at $379 US with a $449 US Founders Edition model but that one is no longer available in the market. Users can now enjoy 1440p gaming performance with top-notch VQ (Visual Quality) and 8 GB of fast GDDR5 memory for under $350 US.

And lastly, we have the GeForce GTX 1060 which is receiving an update in the form of faster memory across all models. The new GeForce GTX 1060 models will be shipping with 9 GB/s GDDR5 chips that compared to 8 GB/s, deliver 216 GB/s bandwidth. This is faster than the 192.2 GB/s on the original variants and we can also see some AIB specific price adjustments on the new models too.

Overall, these announcements made by NVIDIA mean that they have made their GeForce gaming brand accessible to a wide spectrum of gamers. With high-performance products and amazing prices across the board, we can expect the competition to be sweating as they have no product or GPU announcements imminent to match the performance caliber of GTX 1070, GTX 1080 and let alone the GTX 1080 Ti for the next few months.