The GeForce GTX 1060 is finally available to gamers at a starting price of $249 US.

The GeForce GTX 1060 is finally available to the masses in both reference and custom flavors. While the custom models will be starting at price of $249 US, the reference model known as the GTX 1060 Founders Edition will be available at $299 US. The Founders Edition does feature a great design that can overclock beyond 2 GHz but users should set their eyes on the custom variants which we detailed in a previous article. There are several GTX 1060 custom models to choose from that are set at either $249 US or close to the MSRP while offering better cooling and board solutions.

NVIDIA GeForce GTX 1060 Review Round Up:

Note: All reviews will be posted below once they go live.

NVIDIA's GeForce GTX 1060 is based on the GP106 GPU core. The GP106 GPU features a die size of 200mm2 which makes it 14% smaller than the GM206 GPU and 57% smaller than the GP104 GPU. The GP106 houses total of 4.4 Billion transistors which are 1.4 Billion more transistors compared to the GM206 GPU. The NVIDIA GeForce GTX 1060 features the full version of the GP106 GPU so next up, we will detail the block diagram of this graphics chip.

The NVIDIA GP106-400-A1 GPU block consists of 2 GPC (Graphics Processing Clusters). Each GPU houses five SM (Streaming Multiprocessor) units. Each SM consists of 128 CUDA cores which means that the full chip features 1280 CUDA cores. Each SM has 8 TMUs (Texture Mapping Units) which give us 80 TMUs on the chip while each GPC is attached to 24 ROPs (Raster Operating Units) providing a total of 48 ROPs. Each SM consists of 256 KB of register file capacity, a 96 KB shared memory unit and 48 KB of total L1 cache storage.

The GP106 GPU lies at the heart of the GeForce GTX 1060 graphics card.

The new Pascal GPUs feature the latest Polymorph Engine 4.0 which allows significant geometry enhancements in VR and Surround Display applications. Utilizing the new engine is the Simultaneous Multi-Projection tech that reduces geometry work by up to 32X. The Pascal architecture also provides significant amounts of memory conservation through delta color compression which can provide up to 20% more effective bandwidth than what's originally featured on the card.

It's also true that the GeForce GTX 1060 doesn't feature SLI support since NVIDIA is now focusing multi-GPU efforts on the high-end section. The card however does support MDA mode or LDA explicit mode in certain DirectX 12 applications where multiple GeForce GTX 1060 cards could be combined to deliver better graphics performance throughput.

The GeForce GTX 1060 also features a 6 GB GDDR5 VRAM buffer that runs across a 192-bit bus interface. The memory is configured to run at 8000 MHz which is the fastest speed available for GDDR5 memory. GDDR5X is the next phase for GDDR5 memory but comes at a higher manufacturing costs which are not feasible for cards lined up in the budget market.

The NVIDIA GeForce GTX 1060 reference models, also known as the Founders Edition, features a enhanced design scheme. The body was made using faceted die cast aluminum finish to add durability and strength to this card. The enhanced cooler allows the card to keep cool and steady even in brutal overclocking loads as such, the card houses a heatsink that is 50% larger than the heatsink used on GTX 960 offering more surface area for the heat to transfer load. The heatsink itself is a matte black coated aluminum design that features two copper heatpipes that are cooled by the single radial fan on the card.

The PCB on the card uses dual-FETs for both memory and GPU which is a plus over the previous reference designs. These have been used on all Pascal based cards along with low impedance power delivery network regulators and custom voltage regulators for the best current flow and stability.

The dual gate MOSFET is essentially a form of MOSFET where two gates are fabricated along the length of the channel - one after the other. In this way, both gates affect the level of current flowing between the source and drain. In effect, the dual gate MOSFET operation can be considered the same as two MOSFET devices in series. Both gates affect the overall MOSFET operation and hence the output. via Radio Electronics

This allows the GeForce GTX 1060 to deliver the same overclocking potential as its siblings based on the high end GP104 GPU. Internal testing reveals that 2 GHz overclocking figures would be a common sight on both reference and custom variants but I would suggest waiting for the official reviews for more detail info on the overclocking sector of this card. 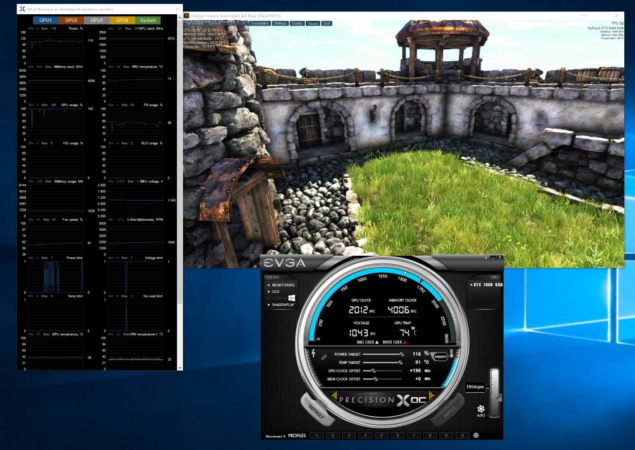 The GeForce 1060 official performance figures comprise of benchmark results in DirectX 12, DirectX 11 and VR gaming. There are a variety of games tested on both 1080p and 1440p which will be the ideal resolutions to test this card.  The card is not only compared to the Radeon RX 480 but also the GeForce GTX 960 since it uses a GM206 GPU core which the GP106 is succeeding.

Note: Both cards were tested at stock clocks for comparison. We would still advise to wait for independent reviews to hit the web on 19th June for a better look at performance. 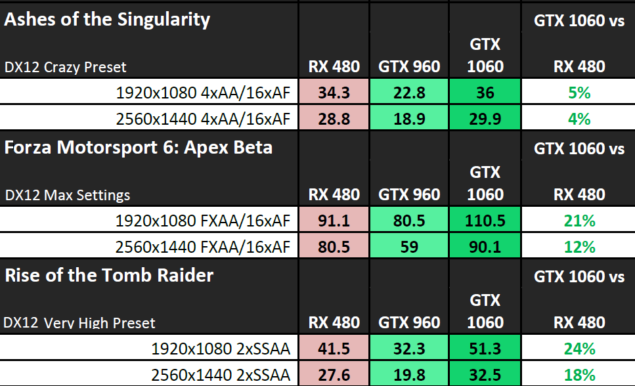 First up, we have the DirectX 12 performance figures in three games. In Ashes of Singularity which is a title very optimized for AMD cards due to their enhanced Async compute architecture, the GeForce GTX 1060 is total 5% ahead of the RX 480 at 1080p and 4% ahead on 1440p. In Forza 6 Apex, the card is 21% faster at 1080p and 12% faster at 1440p. Rise of the Tomb Raider was also tested which uses a mix of AMD and NVIDIA optimizations. It has 24% better performance for the GTX 1060 at 1080p and 18% better performance than the RX 480 at 1440p. All games were tested on max settings with a combination of Anti-aliasing.

Tom Clancy’s Division showed the minimum gains at both resolutions with 1% gain at 1080p and 3% gain at 1440p. Unigine Heaven 3.0 benchmark shows that NVIDIA still has the lead in geometry and tessellation performance ran on the GPU.

The SteamVR performance test was also shown off where the Radeon RX 480 score 6.6 points while the GTX 1060 scored 8.2 points which is a good increase over its competition. Along with SMP support, the card will be offering the users a taste of premium VR experiences at $249 US. You can check out the reviews in the round up above for more details on its gaming and VR application performance.