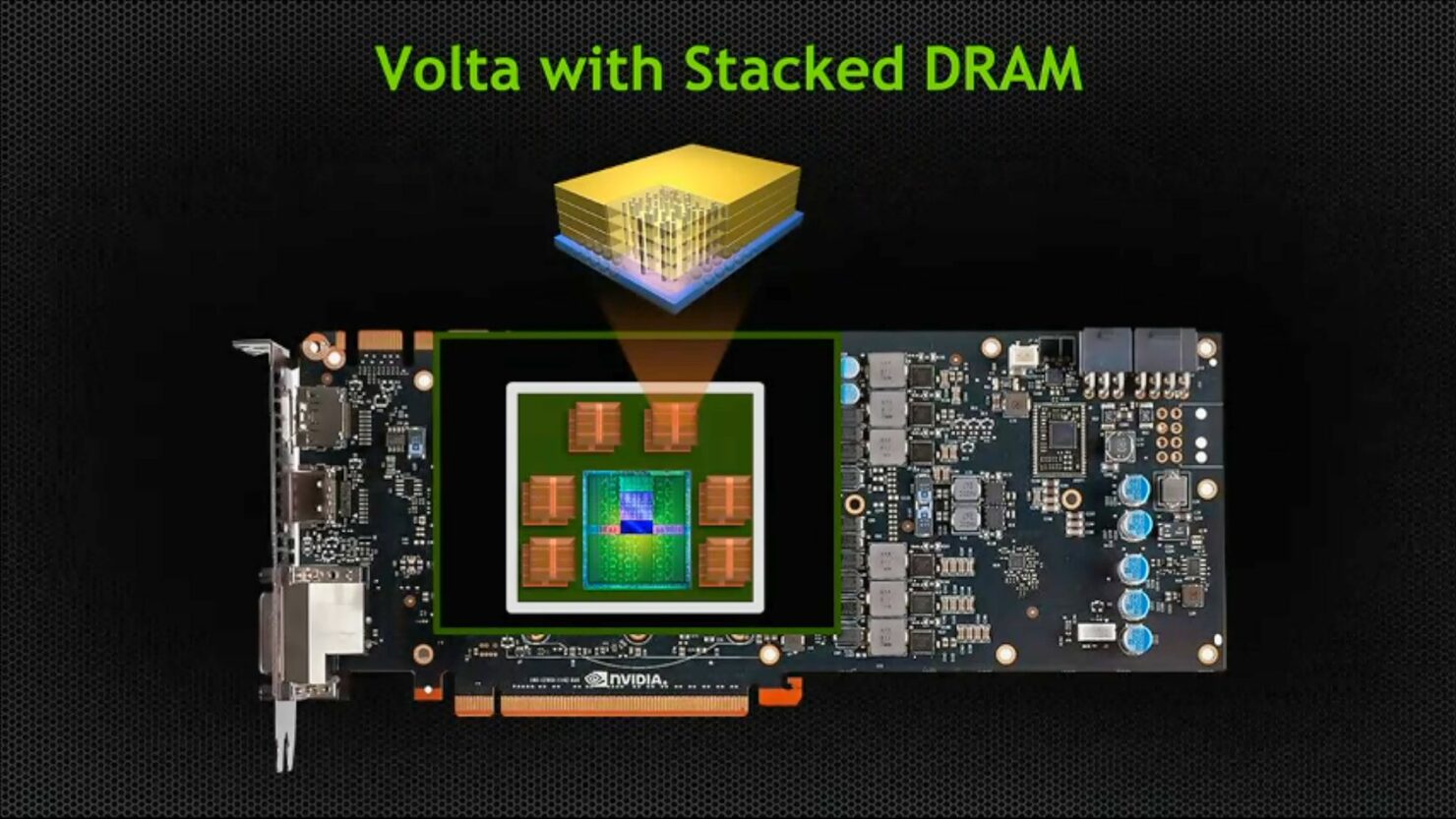 The company has promised the use of stacked DRAM (HBM memory) in the Volta lineup.

There is a very interesting rumor currently making the rounds: that NVIDIA has pushed forward its upcoming Volta lineup (Geforce 20 Series Graphics) for a Q3 launch. The rumor cites a source we haven't used in a long while, and is none other than MyDrivers.com: a chinese publication that was fairly active in the leak scene till a few years back. Since we haven't heard anything else from any other source, I will be marking this one as a rumor till additional information is received.

The first thing that can be taken as a confirmation of a release schedule of graphics card is its appearance on the Zauba database. Immediately after seeing this rumor, I scanned the database for any entry that might appear to be a Volta based graphics card, but was not able to find any. This doesn't necessarily disprove this rumor though since NVIDIA has gotten really good at masking shipments (case in point, the TITAN Xp). Before we go any further, let me recap a bit of what MyDrivers is saying:

The GTX 10 Series lineup is nearing the end of life now that the company has launched the full blown Pascal chip in its TITAN Xp graphics card as well as the silent launch of the super low end, GTX 1030. According to their traditional upgrade cycle, we should be seeing new cards by the end of the year or in early 2018. According to the information given to MyDrivers however,  this event has been pushed forward to a launch sometime in the third quarter of this year.

The reasoning given behind this move is that profits from the sales were not up to the expectation of the management, either due to the fact that the R&D and yield related costs were too high or that the upgrade cycle wasn't properly utilized. Therefore, the release of the GeForce GTX 20-Series graphics cards is planned for Q3 2017 to fully capitalize on the lack of a competitor and increase market share. Even if Vega launches, it is unlikely it will be able to go toe to toe with NVIDIA's highest end.

So what does NVIDIA have in store for the Volta architecture? Well fortunately, we aren't completely in the dark on this one. Apart from what official sources have told us, a very well known leaker from Baidu revealed some details about its upcoming lineup that proved to be pretty enlightening. NVIDIA will be doing some basic optimizations of the SM in the GeForce 20 series, but don't expect a complete overhaul like the one from Kepler to Maxwell. The primary Volta lineup will be divided into four main GPUs:

This is a fairly familiar nomenclature for anyone that closely follows the company. Breaking down these numbers, in order of power, we have the mainstream GV104 Volta GPU, which will probably be found in the GTX 2070 and GTX 2080 to begin with. Then, we have the GV102 GPU, which will probably be part of the Quadro series GPUs as well as the server/HPC market. This should eventually trickle down into the desktop segment in the form of the GTX 2080 Ti and the new TITAN card, which seeing NVIDIA's love affair with the TITAN X title will probably end up being called the TITAN Xv (god, I am just kidding, please don't let this be true).

Finally we have the GV110 GPU. Here is the thing however, the nomenclature GV110, translates to a "refined" iteration of the GV100 GPU since the second numeric stands for the revision no. Since the GV100 will probably be for the server/HPC market only, I can only assume that this GPU will be the last to come to the desktop, and will probably be the full blown die whereas the GV102, will be the yield-adjusted die. According to the leaker, the Volta based GeForce 20 series, should finally step into the world of HBM2, as well as offer improved memory speeds on the GDDR5X platform. It is pointless to speculate on core count and frequencies at this point, so I will refrain from doing so.