In an interesting development today, Nvidia and Ubisoft have just announced a sweet deal for anyone considering to purchase a GeForce GTX GPU for their PC's. It should however come as no surprise. Nvidia has had a long history of including highly anticipated titles enhanced with its support with select purchase of its video cards. This not only helps boost sales of specific units chosen by the manufacturer, but also provides the game developer a good opportunity to benefit from sales of Nvidia's GPUs. 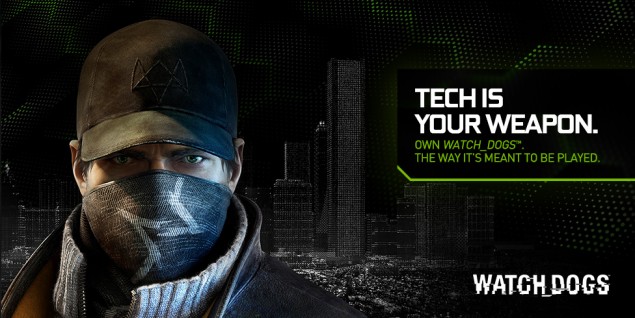 The Watch Dogs Bundle to be available starting today only at select retailers.

The bundling of Ubisoft's Watch Dogs with Nvidia GPUs should not come as a big surprise though. This April, Ubisoft had released a video about Watch Dogs including commentary from Watch Dogs' lead engineer Paul Vlaise.  Vlaise discussed Nvdia's two main technologies in the video which assisted in the game's development. The technologies were HBAO + and TXAA. HBAO +  provides a much richer, realistic and detailed rendering of shadows. TXAA on the other hand, is an anti aliasing technique which deals with unnecessary visual noise during motion. This essentially removes any flickering of fine edges during running.

In the press release today, Nvidia announced a free copy of the game with specific GPU units purchased. The units which will enable you for the free copy are the GTX 780 Ti, GTX 780, GTX 770, GTX 760, and GTX 660. This covers almost all the price ranges of Nvidia GPUs, from the highest to the lowest i.e. $170. The retailers offering the bundle will include e-tailers such as Amazon, Newegg, TigerDirect and NCIX. Other system builders such as AVADirect, CyberPower, Digital Storm, Falcon Northwest, iBUYPOWER, Maingear, Origin PC, Puget Systems, V3 Gaming PC and Velocity Micro are also included. For a full list of retailers participating in the bundle please visit the list on Nvidia's site. And if you haven't watched the Watch Dogs trailer as of yet, here's the video link for it. Enjoy.

OWN THE TECH AND CONTROL THE CITY WITH NVIDIA AND UBISOFT

Select GeForce GTX GPUs Now Include the Hottest Game of the Year: Watch_Dogs

So, starting today, gamers who purchase select NVIDIA GeForce GTX 780 Ti, 780, 770 and 760 desktop GPUs can get their chance to play Watch_Dogs™, the new PC game taking the world by storm and latest masterpiece from Ubisoft®.

Described as a “polished, refined and truly next generation experience,” in Watch_Dogs you play as Aiden Pearce, a brilliant hacker whose criminal past led to a violent family tragedy. While seeking justice, you will monitor and hack those around you, access omnipresent security cameras, download personal information to locate a target, control traffic lights and public transportation to stop the enemy and more.

Featuring NVIDIA TXAA and HBAO+ technology for an interactive, immersive experience, it’s clear that gamers can’t wait to play Watch_Dogs, especially considering the effusive praise that the official trailer received. Launched mere weeks ago, the trailer has already been viewed more than a combined 650,000 times. For gamers, Watch_Dogs seamlessly blends a mixture of single-player and multiplayer action in a way never before seen, and Ubisoft has gone one step further in creating a unique ctOS mobile companion app for users of smartphone and tablet devices allowing for even greater access to the fun. If you haven’t checked out the trailer, please check it out here: https://www.youtube.com/watch?v=3eHCJ8pWdf0.