No, AMD Did Not Sell The Keys To The x86 Kingdom – Here’s How The Chinese Joint Venture Works 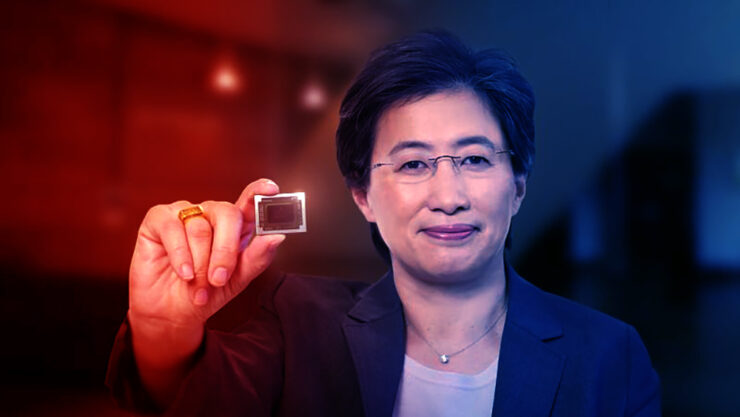 If you recently read a story from a certain major publication, you might believe that AMD gave away its bread and butter x86 IP to China back in 2015. You might also be led to believe that signing a Chinese joint venture was the real reason AMD was able to make a turnaround. I have been reporting about AMD's Zen microarchitecture since 2014 (before it was even made public) and had a difficult time believing the story got any technical scrutiny. This is my attempt to rectify that.

The information presented in this article was collected through various industry sources who are intimately familiar with these matters as well as on-record statements presented by AMD (these are annotated as such).

One of the basic problems with the story in question is that it lacks a working understanding of how chip technology works or even how the AMD THATIC joint venture functioned. The latter is understandable considering the JV is somewhat shrouded in mystery and I had to pull quite a few strings to piece together the details, but as to why the technical portions of piece were not given the proper scrutiny - I have no idea. 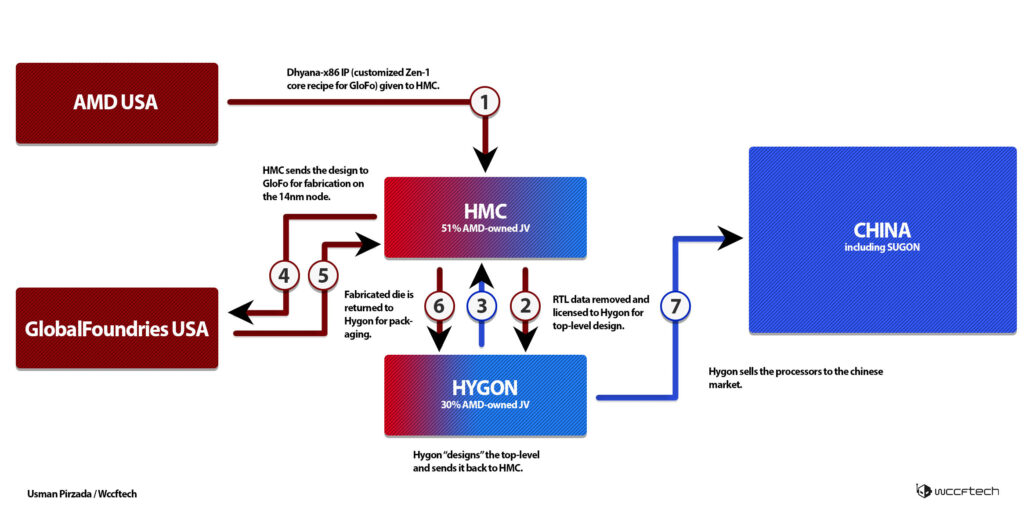 So let's begin with how the joint venture actually works.  It is 2015 and AMD has to deal with two competing requirements at the same time: 1) Basic due diligence and internal SOPs which demanded that it not hand over its bread and butter, be in control of its IP at all times as well as have a controlling interest in any subsidiary (denoted by a majority shareholding) while at the same time 2) allowing China to claim the x86 chips were indigenous in nature. It achieved this through a two-part JV which was dubbed THATIC (Tianjin Haiguang Advanced Technology Investment Co., Ltd.) collectively.

The first entity was a majority-owned (51%) joint venture designed to handle the actual IP and was called Haiguang Microelectronics Co. Ltd. (aka HMC). HMC would also handle the fabrication of the chips as well have access to the blueprints to the metal layers. AMD would keep a close eye on the team working on the core. Since this was an AMD subsidiary, US authorities had no objection to it and the technology at that time was deemed "exportable". In fact, AMD made the following statement on record:

But of course, this did not fulfill China's desire of calling the processor "homegrown" and that is where Chengdu Haiguang Integrated Circuit Design Co., Ltd (aka HYGON) comes in. HYGON only had a minority AMD stake (30%) and was responsible for designing the top-level architecture for the Dhyana processors. Considering Dhyana processors are practically a replica of their EPYC counterparts and Linux users even managed to port EPYC code over to run on Dhyana indicates that this part of the JV was nothing more than an exercise in formality to declare the processor indigenous.

Appearances matter a lot in this deal and if you look at it closely you will see that no IP ever actually exchanged hands. In fact, I would even hazard a guess that not much changed during the "designing" process at HYGON - the evidence betrays any such thought. The end result of this arrangement was that the US & AMD were happy and China was happy - at least back in 2015. With the new political environment, of course, the sensitivity to this deal has changed.

Okay, let's just humor them, what is the worst case here?

Although there is no evidence of IP changing hands, let's imagine a worst case scenario here. Assume corporate espionage happened somewhere during the chain - does this mean China now has access to the base x86 IP? Well, fortunately (or unfortunately depending on which side you are on) it's still a no. 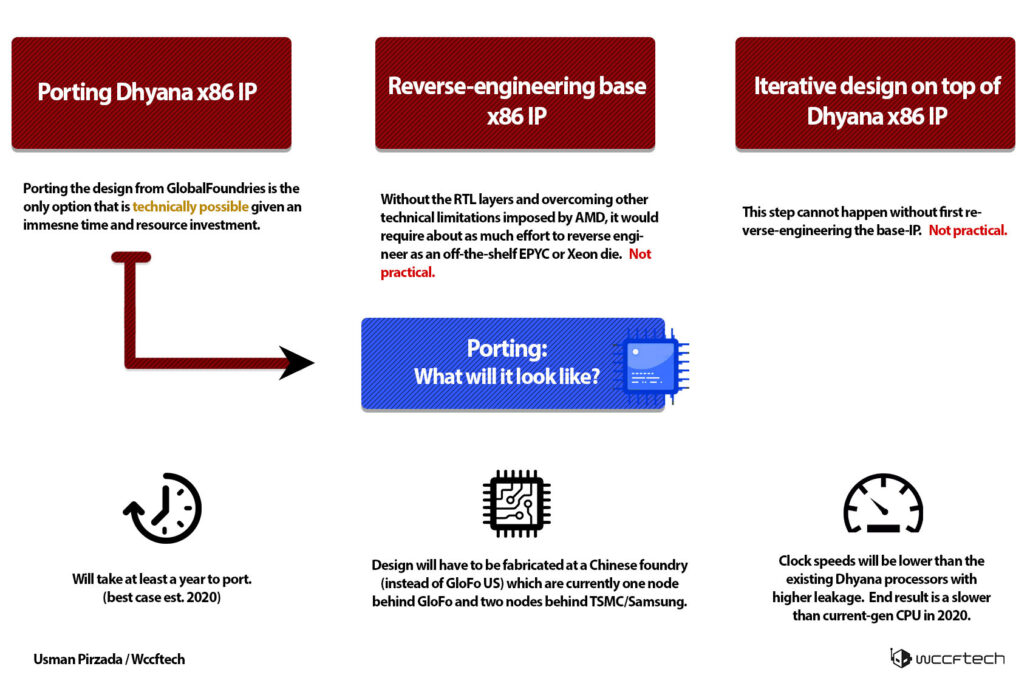 As I mentioned before the recipe is specific to GlobalFoundries and even if China gets the recipe, GlobalFoundries is complying with the US ban and will no longer fabricate these chips. The only feasible alternative is to port the plan to their own Chinese foundries - which requires at least a year, a team of highly talented individuals and lots of monies. The word my source used was that it is "technically possible" which essentially means it's very unlikely to happen but possible if China was determined.

Let's assume they *are * determined. Well, porting in the best of case takes around a year with a team of experienced professionals. Chinese fabs are a node behind GlobalFoundries and two nodes behind TSMC and Samsung which means their *truly* indigenous chip will be slower than the Dhyana processors being fabbed by GloFo, come a year later and will bleed more (consume more power). So while in 2020 china could theoretically get their own slower, Dhyana processor, it will be multiple generations behind US tech.

What about iterative design and reverse engineering the base IP? According to a well placed source, this is "not practical" given it takes more than just the knowledge of how to fabricate a chip to actually improve upon an IP. They can port and replicate the original Dhyana design all they want, but reverse engineering or iterative improvement cannot be done in any time horizon that makes sense. Maybe if they kidnap Jim Keller or something they could pull it off in 5 years.

AMD's turnaround didn't begin with a Chinese JV, it began with Zen

This brings me to the last thorn in the shoe, that "AMD revived its fortunes" through this deal and the company's turnaround began with the signing of its JV. Before we go any further, I want to point out that no analyst worth their salt would claim AMD's turnaround hinged on this deal. Everyone will agree that it was Zen.

Did AMD get some much-needed cash inflow form this deal? Naturally. Was it the key turning point that turned the company around? Not necessarily. To put the cash inflow into perspective, AMD had around ~$900 million or so of cash and cash equivalents in the first quarter this deal was introduced and the first payment was recognized at ~$25 million. Details are hazy but best estimates state that roughly $200 million of the total multi-year $293 million deal was recouped before the ban last week. Of course this doesn't address the possibilities that the news was a contributor to AMD stock growth which would have helped it financially with capital raising that it needed desperately due to the amount of debt it had coming due but it's fair to say it didn't by itself materially alter their cash balance sheet at the time of the deal.

The venture contributed $0 to AMD's revenue growth during this period - an AMD rep confirmed to us.

The Chinese JV was no more and no less important than just about any other deal for cash flow that a public company approves and it most certainly wasn't the reason for AMD's turn around, although it likely contributed to helping the financial position improve.

You see back in 2016, Intel had a virtual monopoly on x86 in place and word on the street was that AMD had an architecture that could break it. I actually wrote on it multiple times concluding with this editorial and calling out the x86 monopoly as finally broken. When performance numbers started to come in and analysts began running their own tests, the stock started to soar. In the present day, AMD has almost no financial benefit remaining from this deal and has no issues complying with the US ban regardless of what other publications would have you believe.

One last thing I would like to add is that China had access to off the shelf EPYC and Xeon processors before the ban and it will have an inventory of perfectly functional x86 processors should it need to. Dhyana was only supposed to be a badge of honor for them - their very own x86 processor - and not something that was actually needed.

To put this into perspective, the fastest Chinese supercomputer right now is built on Sunway processors based on a RISC architecture called Manycore. Tianhe 3 is being planned as an exascale supercomputer and the first generation of Zen processors are not capable of achieving that feat (ie Dhyana or ported-Dhyana certainly won't be). This is why it is very likely that China will continue to use RISC to achieve its first exascale supercomputer as well. With that in mind, you start to see why - unless AMD continues its partnership with China and gives them access to Zen 2.0 - Dhyana processors will quickly become irrelevant. The simple fact of the matter is that AMD has already moved on to the 7nm process (at TSMC) and Zen 2.0 and THATIC is frankly old news.