Team Ninja is planning to release Nioh PC update 1.21.03 with support for keyboard and mouse controls later this week.

The upcoming Steam PC update was announced through Twitter, and is slated for a release on November 30th. Alongside adding mouse and keyboard controls, the update will also address an analogue stick sensitivity issue and fix a matchmaking error at TorII gates. We’ve included the patch notes in the image below: 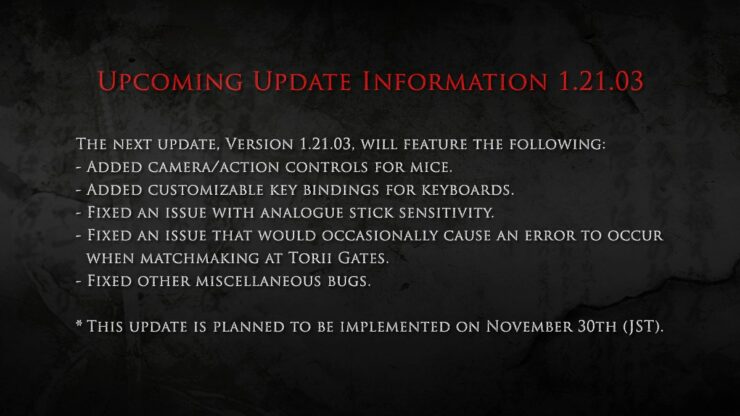 Nioh Complete Edition was released for PC earlier this month, and offers all three DLC expansions: Dragon of the North, Defiant Honor and Bloodshed's End. The Complete Edition also allows players to access incrementally challenging levels through The Abyss mode. The Abyss is made up of seemingly endless floors, unforgiving boss enemies, and de-buffs that will handicap player’s chances in performing their best.

“Team NINJA is well aware of the fact that many gamers have been passionately asking for a PC version of Nioh”, game director Fumihiko Yasuda said upon the announcement of the PC version. “I am thrilled to announce that this massocore game will finally be available for our die-hard PC fans in Nioh: Complete Edition! I hope you all enjoy the unforgettable drama and deeply challenging Yokai battles this action-packed experience has to offer.”