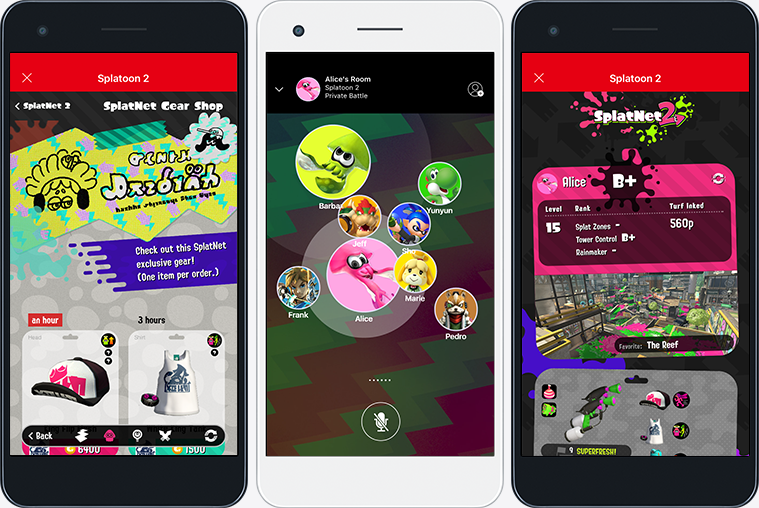 Nintendo has released the Nintendo Switch Online App in both the Google Play Store and iTunes App Store.

Nintendo announced to app to be released on July 21, but as said, it has already been made available for download. At this point, the app isn’t fully functional due to the servers not being active yet. The Switch Online App is an extension of Nintendo’s upcoming online gaming service for the Switch.

Down below you’ll find some screenshots and description from the app on Android and iOS:

The Nintendo Switch Online app is designed to help enhance your online gameplay experience on Nintendo Switch. With this app, you can check game-specific services (e.g., SplatNet 2 for Splatoon 2), invite friends to play with you via social media, and use voice chat while gaming.

◆ Do you play Splatoon 2? If so, you can make use of the dedicated SplatNet 2 service! You can use SplatNet 2 to check all sorts of vital battle-related information, including match results, stages, and rankings!

◆ Inviting friends via social media You can invite friends to play with you in supported games via social media such as Facebook and Twitter. Of course, you can easily invite your Nintendo Switch friends, too!

◆ Using voice chat while gaming You can enjoy voice chat in different ways depending on the type of game you're playing. Chat with everyone in your room or split voice chat into teams and have it out head-to-head!

Nintendo mentions that users will be able to use the app for free until the launch of Nintendo’s paid subscription service in 2018. The Switch was released by Nintendo back in March of this year. “Nintendo Switch allows gamers the freedom to play however they like,” said Reggie Fils-Aime , President and COO, Nintendo of America upon the platform's announcement back in October of 2016. “It gives game developers new abilities to bring their creative visions to life by opening up the concept of gaming without boundaries.”