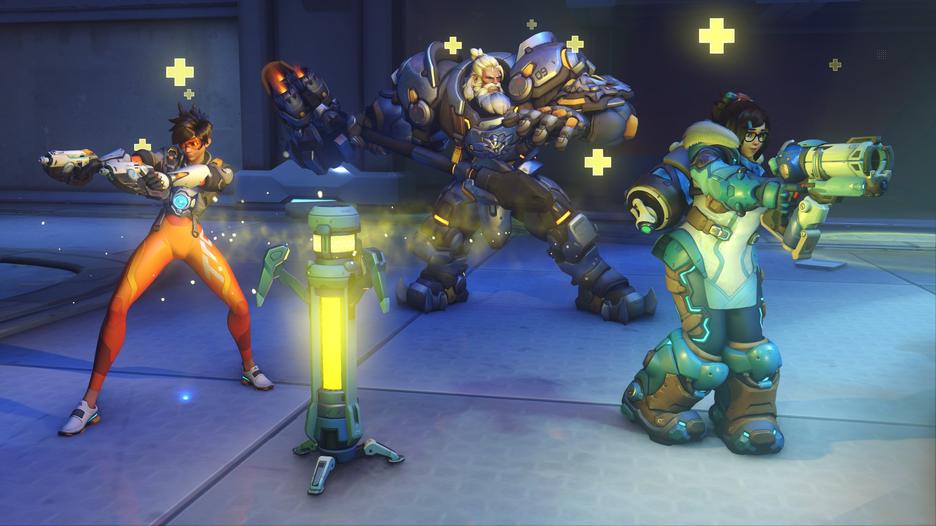 Earlier today, new listings for Blizzard's upcoming release of Overwatch 2 began appearing online through GameStop's German websites. Among the listings were the platforms and price but still no hints to the release date that Blizzard has not yet revealed to the fans (PlayStation Brazil once tweeted that Overwatch 2 would launch in 2020 but there has been no official confirmation from Blizzard Entertainment as of yet).

Overwatch 2 is still planned to be an interesting release alongside the original title. A brand new PvE mode will make its series debut in Overwatch 2 focused on Null Sector with four-player cooperative missions. While supporting all of the original heroes and modes from the first Overwatch, both titles will be able to play together in the competitive 6v6 multiplayer PVP modes. According to GameStop Germany, Overwatch 2 will launch across all current platforms: PlayStation 4, Xbox One, Nintendo Switch and PC. No new listings have been made for either PlayStation 5 or Xbox Series X versions yet but we suspect that these versions may be waiting for Sony and Microsoft to officially unveil their consoles and launch lineups beforehand.

Interestingly, all four versions of Overwatch 2 are currently priced at 70,77 € (Approx. $80.58), placing Overwatch 2 in the same tier as other full-priced retail releases like Cyberpunk 2077. Pre-order prices can always change, but so far this indicates that Blizzard Entertainment is planning on treating Overwatch 2 as a full-priced release rather than an expansion of sorts at a lower price point.

Below is a summary of Overwatch 2's features, translated from German to English through machine translation.

SIDE BY SIDE
The nations of the earth are under attack. The Zero Sector Omnic forces launched a series of surprise attacks around the world, and the planet's governments and armies were quickly overpowered. Now the remnants of the fearless combat force, once known as Overwatch, face the attackers. In this new era of crisis, the heroes of the world must now decide whether to answer the call and reunite to serve the world as a symbol of hope.

Overwatch 2 is the global sequel to Blizzard Entertainment's acclaimed team-based game. It builds on the battle-proven foundation of the original game and carries everything players have accomplished into a new era of epic competition and teamwork. In addition to action-packed battles in PvP game modes, players can explore the universe of Overwatch in completely new ways in fully cooperative missions. The heroes of the world must unite here and face numerous threats all over the planet.

In action-packed, collaborative story missions, players will experience the dawn of a new era of Overwatch as Winston, Tracer and other well-known members of Overwatch team up with a new generation of heroes. Players actively intervene in the next chapter of the Overwatch saga, which spans a series of exciting missions for 4 players. In these missions, players take on the roles of different heroes and jointly defend the world from zero sector, uncover the background of the omnic attacks and face new threats all over the planet.
The fight continues with hero missions, in which heroes go to their limits on missions around the world, defending cities against robotic attacks, eliminating Talon elite agents and fighting the evil forces that threaten the world. In this high replay mode, players can level up with their heroes and unlock powerful customization options that enhance their skills and give them an edge against seemingly overpowering opponents. Players can choose to upgrade Reinhardt's fire strike so that he ignites nearby enemies, or increase the speed of his hammer turns. Or they modify Mei's endothermic radiator so that frozen enemies take more damage and break into deadly ice chips. There are countless possibilities.

Overwatch 2 marks the dawn of a new era for Overwatch's world-famous 6v6 battle. Not only will all heroes, cards and game modes from the original game - including achievements and collections from Overwatch - be adopted, Overwatch 2 will expand the ever-growing one Hero roster with several new playable heroes, enriches the world with even more maps in new locations and introduces the new map type boost, in which two teams fight to guide a robot to their respective destination. The sequel to the game also has an improved user interface with upgrades for graphics and game engine that bring the battlefields of the earth and the beloved heroes to life with even more details.

Overwatch 2, currently in development, has not received an official release window yet. With BlizzCon still tentative due to the COVID-19 pandemic, it is unclear whether Blizzard will plan to unveil more information regarding Overwatch 2 at another digital venue. We'll continue to update our stories as we learn more information about Overwatch 2 in the coming months.