In late January, Network Next revealed its ambitious plans to improve latency in online games, positing that the Internet is currently 'broken' for game traffic. Network Next also announced a partnership with Psyonix to deliver the first implementation of the technology in the popular Rocket League game.

Earlier this month, it was revealed that the technology would use Limelight's Points of Presence in the USA. However, we still had a fair amount of questions on how Network Next intends to improve the online multiplayer experience for everyone, which is why we contacted CEO Glenn Fiedler (a veteran of the games industry who worked on games like Tribes: Vengeance and Titanfall) to learn more details. You can find our chat below. 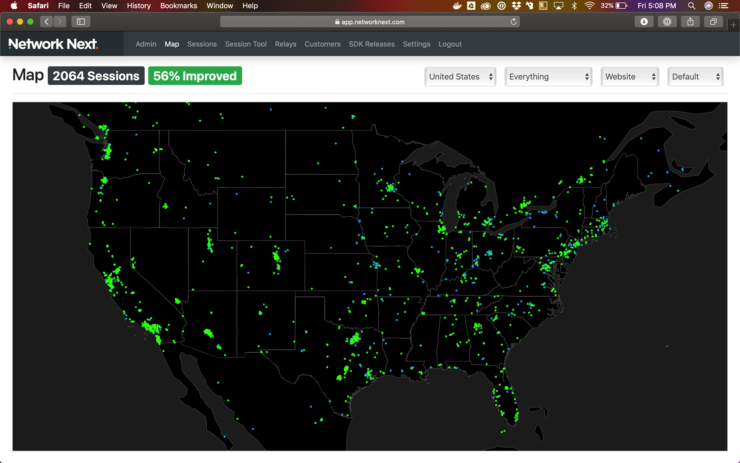 Here's a live map of the Network Next technology in action.

Can you describe, in layman's terms (or as close as it gets, anyway), what happens behind the scenes when using Network Next to deliver lower latency?

CDNs do this by pushing the static content really close to your ISP’s network, so it’s faster to download. To do all of this, they need to interconnect with those ISPs and in many cases, have their own private internet backbone.

Network Next is a way to take this infrastructure already built for accelerating websites and use it to accelerate game traffic, which is far more dynamic and interactive than normal “static” web content.

Our technology steers game traffic off the public internet and across these private networks that are faster and less congested. This lowers latency and improves consistency when you play a game that integrates our technology.

Can you provide some concrete examples of how much of a latency drop you're currently seeing with your technology in Rocket League?

It’s too early for us to talk about specific customers.

We’ve seen cases where players have their latency reduced from 120ms to 20ms. These players have a terrible route to the game server and our technology is able to fix that.

The average case isn’t quite so dramatic, but 20-30ms improvements are common. We also reduce packet loss and jitter so the play experience is better, even if the ISP is already doing a pretty good job and the latency is around the same.

Will it be enough of an improvement to make competitive gaming between players in different continents viable?

We can’t beat the speed of light, but we can get as close as possible...

In cases where multiple undersea cables exist between countries, our technology ensures that your game traffic takes the lowest latency path, which significantly reduces latency for international play.

This means that for international packets it’s paradoxically faster to go up to the LEO satellites, around the world via lasers between satellites (speed of light in a vacuum) then back down to the ground. This sounds like science fiction but it’s actually happening RIGHT NOW.

How does the upcoming advent of 5G and cloud game streaming (Project xCloud, Project Stream, etc.) technologies intersect with your initiative, if at all?

5G and edge compute initiatives are interesting because they open up stuff like location-based AR, but why waste all this cool edge compute on game streaming? Game streaming actually adds latency to the game. Shouldn’t we be using technology to reduce latency for players instead?

Other than Rocket League, are you already in contact with other developers of live or in development games? If so, are you at liberty say who they are?

We’re talking with many games companies and the overwhelming response is that they’re very interested in making their games play better over the internet. We’re not at liberty to say who we’re speaking to, but we’ll have more to share in the future.

Are you looking for any additional funding in the short or mid-term?

We have all the funding we need to execute on our vision right now.

Is there anything else you'd like to add about Network Next?

Network Next Wants to Improve the Latency in Multiplayer Games, Starting with Rocket League