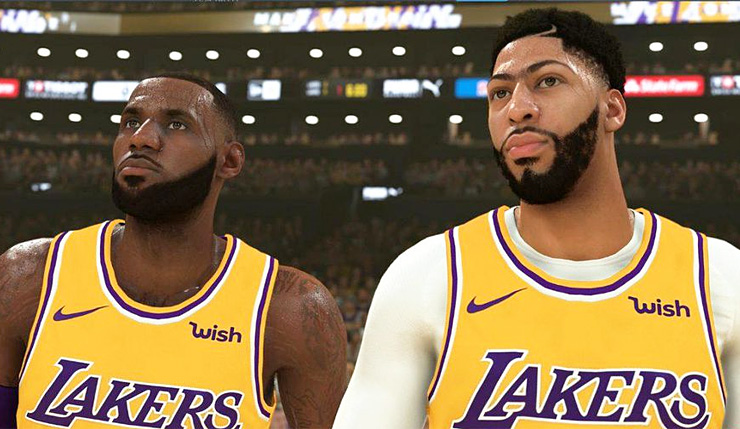 In recent years, NBA 2K’s MyGM mode, once one of the best parts of the franchise, has fallen on hard times. The team-management sim’s underlying mechanics haven’t changed in years, and the writing has devolved into wordy nonsense -- in my review of NBA 2K19, I said MyGM mode felt like “playing video game designed by Grandpa Simpson.”

Thankfully, it seems the folks at Visual Concepts have heard the complaints about MyGM and and will be making some changes in NBA 2K20. MyGM 2.0 aims to freshen things up with new goals and character interactions, and allow for deeper planning and strategy with the addition of a new Action Points system and skill tree. Worryingly, there’s no talk of improving the writing, but hopefully the endless prattling is cut down on a bit.

Here’s the official rundown on MyGM 2.0: 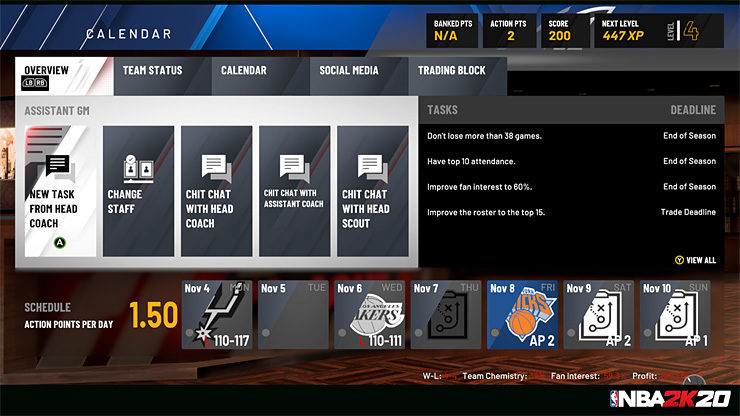 We’re adding a brand-new overview landing menu, along with a new system of Action Points (or AP) that drive MyGM. Every day you play in MyGM, you’re going to have to make a conscious choice on what’s the best thing to do to help turn your team into a winner. Do you want to spend time trying to make the team better via a trade? Do you want to spend time having chit chats with the players, staff or other GMs? Do you want to take control of the team directly and play a game on the sticks? Now, all of the core actions will now take an AP, causing you to make meaningful choices about how the best and most efficient way is to build a winning team.

Every time you prove that you’re a great GM, you’re going to earn points. These are generally represented by winning games, making the playoffs, or having players win various awards. We lower the amount of score you receive from players that were inherited when you started the mode, but as time goes on and more of the signings are completely yours, the score you earn will continue to grow. You can’t simply choose a stacked team and expect to crush the leaderboards; you’ll need to make sure that you’re constantly moving and shaking the roster to be your own perfect vision as to how to win chip after chip.

MyGM 2.0 is now global. It’s not just about taking your team to the top, now the name of the game is to do it with flawless efficiency. To get to the top and stay there. To outplay, out-draft, outwit and outlast all of the other sim rivals across the world in our brand-new leaderboards. With the leaderboards, you’ll be able to see how your team is faring against everyone else in the same difficulty, and judge them against the greatest of all-time, or just filter it down to the month.

The leveling system has been revamped heavily from MyGM 1.0. Back then, you would gain experience tied to your user profile that gave two main benefits: facility upgrades and purchasing persuasive pitches. These boosts tended to be pretty overpowered; giving +5-10 across the board and boosting potential made it easy for anyone to simply walk in and simulate their way to a championship. We tried to figure out what the coolest parts were about leveling, learn the lessons of what worked with the previous system, and fold it together into the new MyGM 2.0 leveling experience. Changes include: 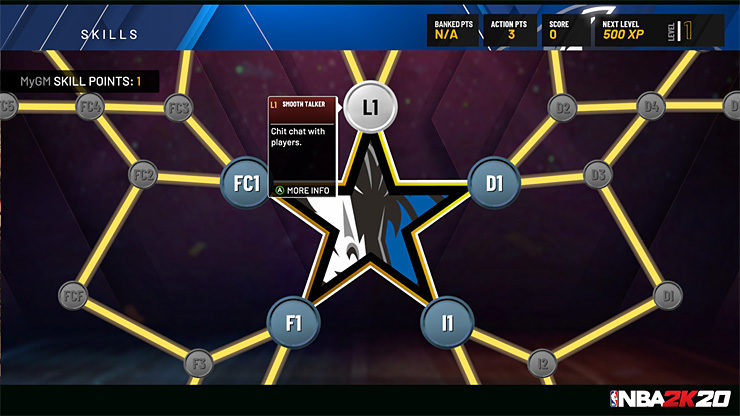 MyGM 2.0 features a brand new skill tree. You can pick your general style to start with at level one, then you can move along any of the starting five trees or to any adjacent skills. Here’s an overview of the five trees:

A goal of MyGM 2.0 was to help make the relationships you build along the way matter more. In addition to a more comprehensive overhaul of the Morale and Team Chemistry systems across all MyLEAGUE modes, now users are able to have relationships with all of their players, the team staff, the governor and even opposing GMs.

Keeping up good relationships with the organization will be critical in order to access the full suite of menus now; the head coach will keep his in-game strategy locked down until you’ve built (and kept!) your relationship with them sufficiently high enough that you can access the Coach Gameplan menu directly.

In MyGM 1.0, only the team governor would give you goals. Now, anyone in the organization can give a task – the governor, staff members and even the players. Echoing the pressure of the real-life general managers, sometimes the requests will not necessarily be for the best interest of the team. You shouldn’t be able to just turn on the autopilot and complete all goals as delivered; you’ll have to use a discerning eye to figure out which goals actively help the team, which ones are suboptimal but worth the relationship boost for completing and which ones you’ll simply have to salvage.

Seems like Visual concepts is putting a solid amount of effort into refreshing MyGM, but the proof will be in the playing. Speaking of playing, NBA 2K20 will be dropping a demo on August 21, which will give players the opportunity to make a player and get started on MyCareer.

NBA 2K20 dribbles on PC, Xbox One, PS4, and Nintendo Switch on September 6.