The National Aeronautics and Space Administration, more commonly known as NASA, has been active in exploring extra-terrestrial beings and has been especially fond of the red surface on Mars since the 90’s but now it seems the space agency is looking to investigate Martian skies. The agency’s Armstrong Flight Research Center is carrying out tests of a large boomerang looking prototype flying wing aircraft called Prandtl-m; it will be the first man-made vehicle flying in the Martian skies. 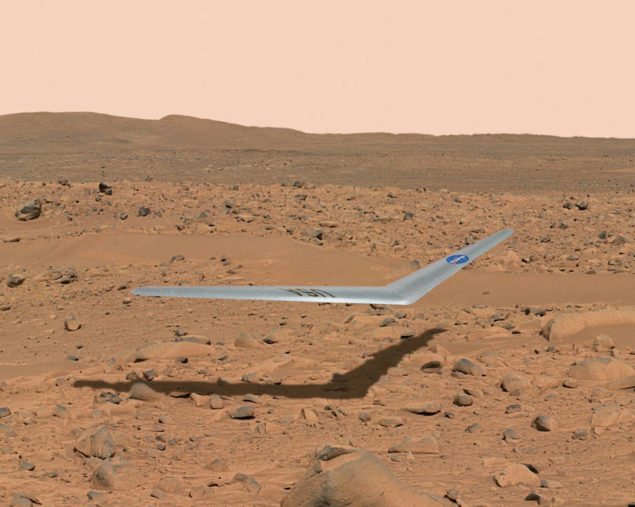 I know what you’re thinking the name is so weird, and that’s because it is an acronym for 'Preliminary Research Aerodynamic Design to Land on Mars'. The design is basically flying wings (as seen in the photo above) like those in a boomerang and it will be ready for testing by the end of this year. The test will done by launching the aircraft to an altitude of 100,000 feet via a balloon, this high altitude would be enough to simulate the atmosphere of Mars, further tests will take the Prandtl-m to heights of around 450,000 feet for better testing.

Right now the aircraft is far from being complete, so a lot of detail is not available but initially its specifications stated that it has a wingspan of 24 inches (2ft) and weighs around 1.2 kg mainly thanks to the body being made out of a composite material like carbon fibre or fiberglass. The aircraft will be used to take high-resolution photos of the Martian terrain mainly to look for landing sites which would assist manned missions to the planet. The long-term plan includes a modified wing design (with fold-able wings) that would enable the aircraft to fit into a mini satellite known as CubeSat.

According to NASA's scientist Al Bowers: "The Prandtl-m could overfly some of the proposed landing sites for a future astronaut mission and send back to Earth very detailed high-resolution photographic map images that could tell scientists about the suitability of those landing sites."

Once the required tests are cleared by the aircraft it will then be ready to go to Mars, it will be folded up and deployed from a 3U CubeSat. The CubeSat would be the part of a future rover that will be sent to Mars, the rover consists of 3 CubeSats that are around 4 square inches in dimension, and these CubeSats are research satellites.

According to NASA the Prandtl-m will be a “part of the ballast that would be ejected from the aeroshell that takes the Mars rover to the planet.”

After this the plan is to have the aircraft glide across the surface of the Red Planet and take high resolution photos of the terrain, this could help find potential landing sites for future missions with astronauts and the pictures would allow scientists to pinpoint exact locations that are feasible for landing. The development team says that the aircraft could reach Mars by 2024 and NASA plans on sending man to the Red Planet by 2030.