Frustrating. It's the word that fits both Dark Souls and Demon's Souls like a glove. Make no mistake, I do not mean to portray the series in a negative light. It's one of those franchises which have stuck to their guns, making games which can only be completed by the most hardcore and persistent, resulting in broken controllers for gamers both in the East and the West. Hence, Japanese developer From Software and publisher Namco Bandai has earned the respect of many a gamer and critic.

Your soul will burn... and beg for mercy.

Springing from the King's Field series, Demon's Souls made quite a splash back in 2009 as a PS3 exclusive noted for it's impressive visuals and audio quality. But what really reeled gamers into it's web was the outrageous difficulty level. Dying was mandatory. You had to be persistent and keep yourself from giving into your unholy desire to destroy your console, television and your controller and then burst into a fire-breathing demon. And this desire consumed your in the first fifteen minutes. Hell, the game starts off by pitting you against a boss level demon, but thankfully defeat is scripted.

Two years later, From Software came out with spiritual successor, Dark Souls, which was similar to Demon's Souls in many ways including it's unusually high difficulty level and same art style. Dark Souls, too, was a hit with critics and fans. The only weak point about it was that the story was not an integral part of the experience but the sense of achievement after beating a particularly bothersome boss is unparalleled. 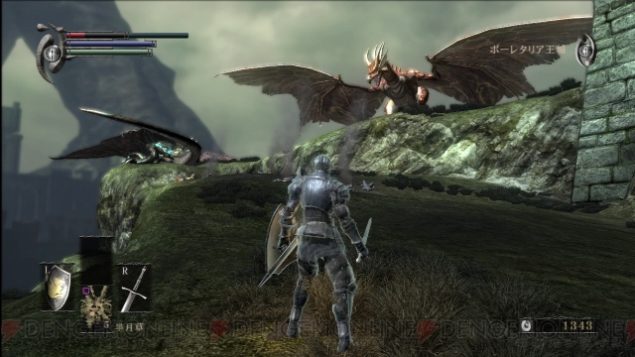 The dragon will devour your hopes and dreams.

So, Namco Bandai Community Manager Rich Bantegui posted this on his Twitter : "Check it out DARK SOULS fans - An announcement is coming......"

So, what might this mystery announcement? Could be anything, really. Namco Bandai might come out with a PC port of the game since Namco Bandai administrator Tony Shoupinou really wants a PC port to happen. DLC cannot be ruled out since it's a trend many publishers and developers follow religiously this generation. At best, it could be the announcement of a brand new game with the same unforgiving difficulty system and art direction. Make it happen, From Software!
Namco Updated their Facebook Page and are asking for Likes in order to unlock the announcement early, if you are among one of the few eager for helping in speeding up the announcement head on over Here, There have been several hints which have been revealed here which suggest the game could be headed for a PC release.

So what do you think? New game incoming? Port for PC? Or just DLC? Discuss below!

Elden Ring Is in Polishing Phase; Game Will Be Very Similar to Dark Souls – Rumor