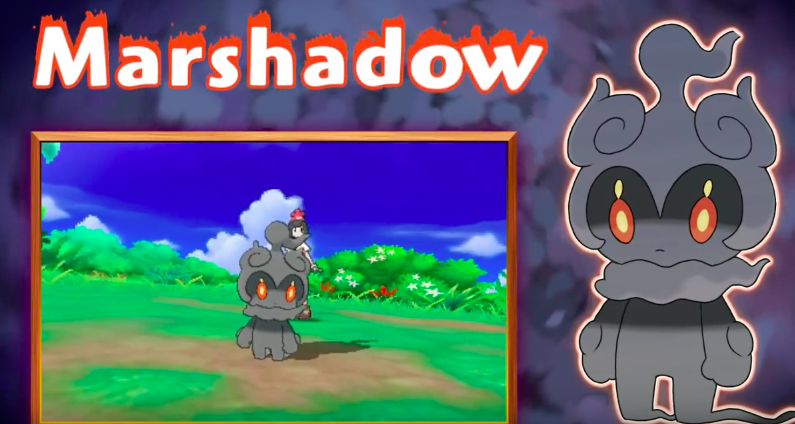 The latest mythical Pokémon Marshadow has finally come out of the veil for Pokémon Sun and Moon. The rumor mill was abuzz for months about the mythical Pokémon and today - the first look video is here. However, we still have no clue about how to catch this Generation VII Pokémon.

The official Pokémon website teases the gameplay for Marshadow. A message on the website reads,"Marshadow cannot be encountered in normal gameplay. Details will be introduced in the future on how Trainers can get this Pokémon for their game,"

According to Pokémon encyclopedia Bulbapedia, Marshadow is expected to be a dual-type fighting/ghost Pokémon with unknown evolutions. It also notes that Marshadows's headgear turn green whenever it uses its Z-move.

Marshadow is one of seven Generation 7 legendary and mythical Pokemon. The last Pokémon with such vital was Magearna, which was made available to players via QR code in December, last year. There are chances that Marshadow will also be rolled out via QR code.

Marshadow's "Soul-Stealing 7-Star Strike.” Z-Move can be seen in the video. The mythical creature also appears in the upcoming Pokémon movie - I Choose You! The movie will be released in Japan in mid-July. There is no information whether the movie will release in other regions outside Japan or not.

Interestingly, the last mythical Pokémon, Magearna was available for capture after finishing the main plot in Pokémon Sun and Moon. In another news, there also rumours about a new Pokémon game. Pokémon developer - Game Freak posted a job advertisement for short-term employees to work on "an RPG game that is popular on a global scale" on a console.

Also, a Pokémon Sun and Moon spin-off game dubbed as Pokémon Stars was rumoured to be under development for Switch. The game was expected to debut somewhere in the mid of this year, but the release date has been pushed to sometime later this year.

It would be pretty exciting for the players to know how to catch this latest mythical Pokémon. Stay tuned with us to find out more about the new details.