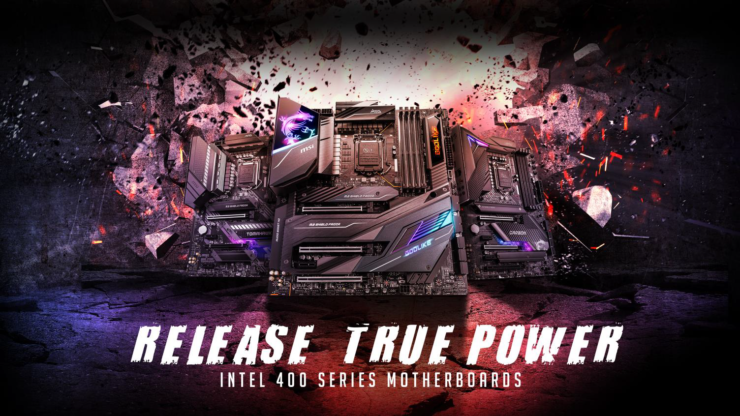 MSI unleashes true power with its Z490 motherboard lineup, featuring a full range of designs which would offer full support for Intel's 10th Generation Desktop CPU family. The MSI family is made up of several families, mainly including the MEG, MAG, MPG, and PRO series. I will be rounding up the specifications for motherboards featured in all of these lineups.

The MSI lineup, as mentioned before, will feature a range of families. These include the MEG or Massive Enthusiast Gaming lineup which focuses on the enthusiast gaming segment, MPG which stands for Massive Performance Gaming and carters the high-end market, MAG, or the Massive Arsenal Gaming which focuses towards the mainstream and budget segment while the PRO series is designed with content creators in mind. MSI is adopting some key features for all of its Z490 motherboards series which include:

Surely, MSI is pushing its Z490 motherboard series very aggressively and it is reflected in the specs sheet they provided us which clearly shows a big lead versus competitors in various segments. So let's take a look at the motherboards themselves, starting off with the MEG lineup.

MSI is back with its GODLIKE, this time featuring the Z490 chipset and design that is much powerful than ever. The MSI MEG Z490 GODLIKE features an insane amount of technical expertise that has gone into its design and development. Featured as MSI's flagship Z490 product, the Z490 GODLIKE comes with an insane power delivery setup. You get an Intersil (ISL69269) Digital PWM that is based on 8 phase controllers powering a 16+1+1 (90A SPS) phase VRM supply. The board also consists of 16 Titanium Chokes (3rd iteration design). The mirrored power arrangement that is exclusive to the MEG series doubles the phases and monitors dual outputs to ensure identical power delivery for each of the doubled phases. Power to the VRMs and CPU socket is provided through a dual 8-pin connector configuration.

The rampage doesn't end here, the MEG Z490 GODLIKE also features support for four DDR4 Rams with speeds of up to 5000 MHz (OC) and capacity of up to 128 GB. The board features 6 SATA III ports and also dual USB 3.0 front panel headers. Before we talk about I/O and expansion on this motherboard, let's look at the design itself. MSI's MEG Z490 GODLIKE is simply put, brilliant in its design and features. The E-ATX motherboard features several heatsinks and a futuristic design theme on it with brushed metallic accents in grey and black colors.

New to the motherboard are several mirrors that are embedded on the motherboard which display various RGB effects and one cut out actually has a built-in OLED screen, something which is new to MSI's motherboards & only specific to the GODLIKE. You will be able to see a range of things such as GIFs, System info, Debug function, and various other details with the Dynamic Dashboard II utility. Like all MEG series motherboards, the GODLIKE features active cooling in the form of two small fans featured under the I/O plate and right next to the extended heatsink. The fans are Zero Frozr technology compliant and vent air out of the pre-fitted I/O shield. MSI states that you can expect up to 10C lower temperatures with active cooling. The heatsinks on the VRMs are fin-based and even come with Heatpipe and backplate for the MOSFETs. The same goes for the PCH which features a nicely designed heatsink with Mystic RGB support.

Now coming to the expansion slots, the MSI MEG Z490 GODLIKE motherboard features triple PCIe 3.0 x16 slots and a single PCIe 3.0 x1 slot. There are also triple M.2 slots, all of which are cooled by the M.2 Shield Frozr heatsinks. There's an additional 6-pin connector on the bottom of the board to help it support the additional power stress of the PCIe lanes when loaded up with several devices at once. But here's the thing, MSI has added extra PCB layers to the PCBs on all Z490 boards, 8 in total on the GODLIKE. And MSI is officially stating that all of their Z490 motherboards have the necessary hardware components to enable PCIe Gen 4.0 support when the next-generation 11th Generation CPUs hit the market.

Moving to the MEG Z490 ACE, we once again see the use of 16+1 VRM phases rated at 90 Amps. It also comes with dual 8-pin connectors to power the CPU socket. The ACE comes with a less flashy and much neater look, featuring brushed metallic surfaces on its heatsinks along with gold yellow textures which have been a staple of the ACE series boards. The ACE supports up to 4800 MHz that is slightly lower than the GODLIKE's 5000 MHz but even 4800 MHz is fast for DDR4 memory. Once again, you get 6 SATA III ports while expansion options include three PCIe 3.0 x16 slots, two PCIe 3.0 x1 slots, and triple M.2 slots, all of which are PCIe Gen 4 ready.

The next two models are part of the MEG Unify lineup, an all-black design for RGB heathens which was introduced with the X570 Unify series. The Unify motherboards have become really popular in a short amount of time. The MEG Z490 Unify would feature a 16+1 phase power delivery powered by dual 8-pin connectors. It supports 4800 MHz DDR4 memory and features 6 SATA III ports too. In terms of expansion, the board houses three PCIe 3.0 x16, two PCIe 3.0 x1, and triple M.2 slots, all of which are PCIe Gen 4 ready.

And lastly, to finish off the MSI MEG Z490 lineup is the Z490I Unify, the only ITX offering in the line. This motherboard also features no RGB support and is designed to feature cool black aesthetics. The board features an 8 Phase Direct Power Design powered by a single 8-pin connector. It comes with DDR4-5000 MHz support and features two DIMM slots to support up to 64 GB capacities. The board has a single PCIe 3.0 x16 slot which is PCIe Gen 4 ready along with dual M.2 slots, one at the front and one on the back. The front M.2 slot is cooled by the M.2 Shield Frozr heatsink. Storage options include 4 SATA III ports.