MSI's black and white "Krait" series motherboards have always been drop dead gorgeous and the Z170 Krait Edition from Microstar International is no exception. Featuring the Intel 100 series chipset and the Z170 core logic, the mamba style coloring will undoubtedly win the hearts of many. Launching as soon as Intel's Skylake gets out the front door, this board will be one to look out for. 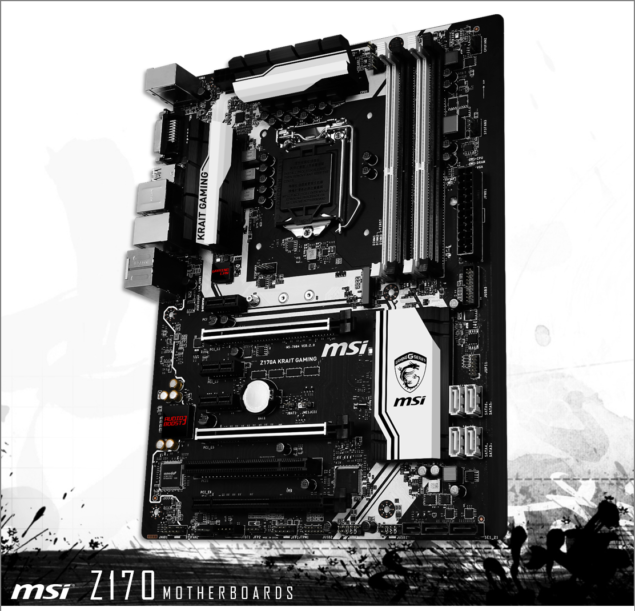 The board features the obvious LGA 1151 socket as well as the accompanying 4 DDR4 DIMM slots. The heat spreader for the power circuitry is painted a beautiful white and black. The motherboard also has three PCI-e slots out of which two are protected against EMI and have the full x16 lanes while as the last one is wired for only x8. Three PCI-e x1 slots and a plain ol PCI slot as well. An M2 connector is also included as well as the customary SATA connectors. Two of these will be able to provide SATA Express with over 16 Gb/s of throughput. The Audio Boost 3.0 chip can also be seen as well as the border dividing the PCB fabic of the sound circuitry from the rest of the board. This is done to minimize EMI interference in sound output from the chip.

I must admit that I am sorely tempted to request a review sample of this board and then refuse to return it. Although a pure white or a black-white aesthetic is probably the most difficult to pull of in a rig, but the MSI Z170 Krait Edition does it immense justice. The 100-Series chipsets will be separated into the Q170 and Q150 motherboards for the corporate spectrum, B150 Motherboards for the business spectrum, Z170 and H170 for the consumer spectrum and H110 for the value spectrum. All chipsets will support Skylake and will feature LGA 1151 socket.