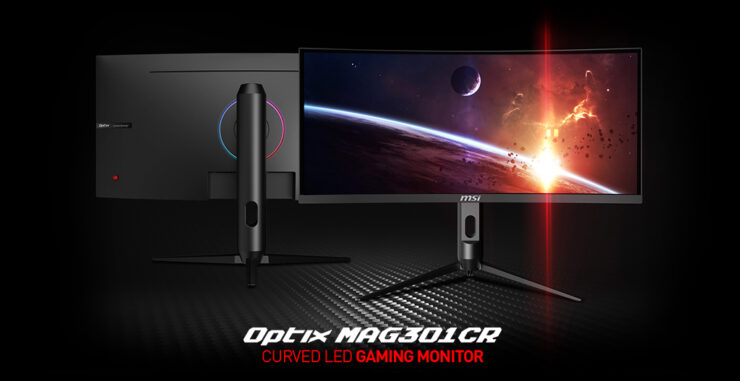 MSI has unveiled its Optix MAG301CR, a 30-inch WFHD ultra-wide monitor that is built to give you a competitive edge with a 2560x1080 resolution, 200z refresh rate, 1ms response time curved panel. Combined with FreeSync technology, the MAG301CR can match the display's refresh rate with your GPU for ultra-smooth gameplay.

MSI Unveils The Optix MAG301CR - Features A 21:9 Widescreen On A 30 Inch Panel Which Is Quite Odd But Could Be The Next Big Thing

Compared to the traditional 16: 9 panel, the 21: 9 widescreen increases the overall screen size allowing gamers to enjoy a wider viewing angle. The widescreen increases working space allowing increased multitasking capabilities, significantly increasing operational and gaming efficiency. The Optix MAG301CR is also accompanied by its excellent contrast and image smoothness which not only makes competitive games smoother but also plays a role in web browsing or viewing multimedia.

This monitor is suitable for consumers that enjoy both games and general entertainment.Optix MAG301CR curved gaming monitor features a wide 30" WFHD panel that supports resolution up to 2560x1080. This 21:9 panel allows gamers to enjoy a wider viewing angle compared to other traditional 16:9 panels.

A widescreen will also allow gamers to multitask with several windows, leading to significant improvements in operational and gaming efficiency. The MSI Optix MAG301CR is equipped with a 200hz refresh rate and 1ms response time VA panel which shines the brightest in fast-paced game genres such as FPS, RTS, and MOBAs. These games require quick and precise movements and with ultra-high refresh rate and fast response time, you will be well ahead of your competition. High Dynamic Range (HDR) display delivers better color and contrast accuracy. Optix MAG301CR is equipped with HDR technology that can produce images with more detail, a wide range of colors, and look similar to what is seen by the human eye when compared to traditional monitors.

These features top the cake on a high-quality, mid-sized monitor that can be used for gaming or more creative tasks. The pricing of the monitor has not been released and neither has the release date.