Resizable-BAR (AMD Smart Access Memory) support has so far been exclusive to mainstream AMD & Intel platforms but it looks like MSI has finally brought the feature to the HEDT platform. MSI has announced new BIOS for its entire AMD TRX40 board lineup which now supports the resizable-bar feature with the Ryzen Threadripper CPUs.

As per MSI, they have now listed the latest BETA BIOS on the support page for all four of their AMD TRX40 chipset based motherboards. The main update within the BIOS is support for the resizable-BAR function which "enhances GPU performance including AMD Radeon RX 6000 series & NVIDIA RTX 30 series". 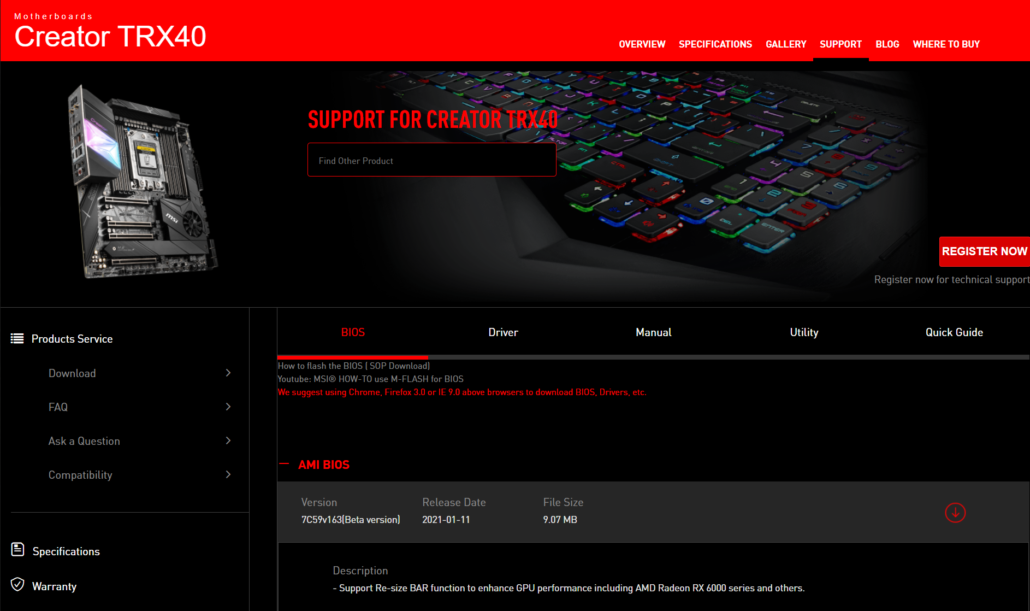 The motherboards which have received the update include:

We can also confirm that resizable-BAR is indeed working on the MSI TRX40 motherboards as seen in the screenshot below:

The test platform upon which the resizable-BAR feature was tested includes the MSI TRX40-PRO motherboard, the AMD Ryzen Threadripper 3990X 64 Core CPU & an AMD Radeon RX 6800 GPU. You can clearly see that the Large Memory Range function is showcased within the GPU resource panel which confirms that the feature is enabled on HEDT platforms and MSI is the first to achieve this feat.

We don't have any specific performance metrics yet but the performance improvement would be dependent on the application. MSI has also mentioned that they aren't stopping at just AMD HEDT platforms and also could plan a release of the said feature on Intel's platforms though it's hard to say how early that would be right now.

If there is a demand for the said feature on Intel's HEDT CPU platform, then MSI may look into enabling the feature on the platform but as of right now, the BAR support for Intel HEDT boards is 'TBC'/ Stay tuned for more info when it comes to resizable-BAR support on various Intel and AMD platforms in the coming weeks.