Motorola XOOM is the first ever Android tablet running on Google Android Honeycomb OS, which is especially designed for tablets. XOOM is an amazing tablet and offers some great features. Currently, XOOM is exclusive to Verizon Wireless in USA, and AT&T CMO said a few months ago that they will be getting Motorola XOOM later this year. Now it looks like the time is near because the image below is showing it that Motorola XOOM for AT&T is listed on FCC. 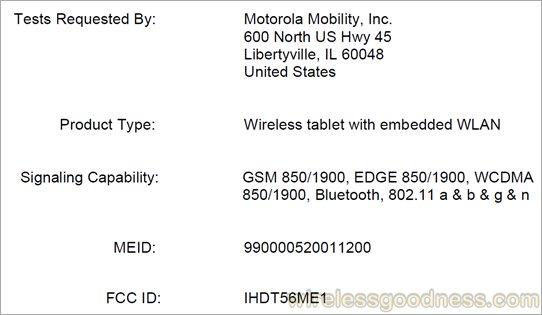 Model number of the tablet is IHDT65ME1 and is listed as a wireless tablet.  About the radio capability, the listed device comes with GSM 850/1900 bands and WCDMA 850/1900. Actually, it means that the listed device is capable to run on AT&T network. Well, no words on when it’s coming but I think it will be out in 2-3 months.

So AT&T folks, are you looking forward to Motorola XOOM?