The successor of Moto X 2014 is expected to be released this year, and while there is no official model name to go with the upcoming handset, it is going to be referred to as Moto X 2015. News that a new Moto X smartphone was going to be launched in 2015 came from Motorola Mobility president Rick Osterloh. The executive laid down some fresh news for those craving to witness another Motorola device in the smartphone market. 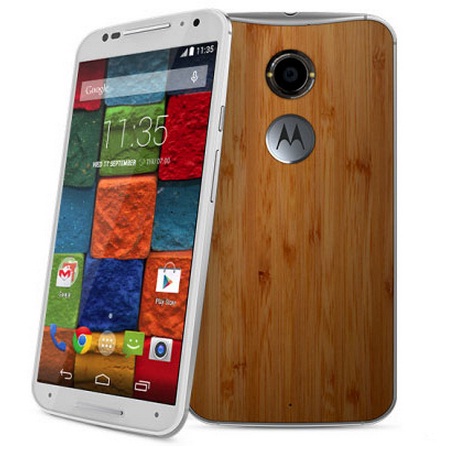 Responding to some queries on Twitter, Rick Osterloh was initially asked by Edoardo Maggio (@northead) that: 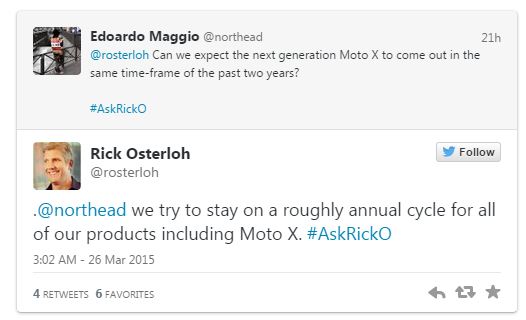 Additionally, the individual was also asked from another Twitter account holder Sumer Broota whether or not Motorola was going to release a fully functional tablet this year. His query and reply are as follows: 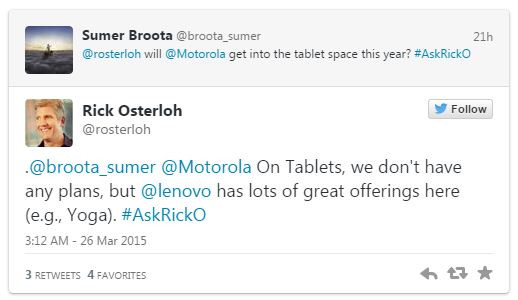 In terms of evidence, the aforementioned query session is sufficient enough to claim that Motorola is currently working on releasing the Moto X 2015. The Moto X 2014 is by no means an obsolete handset since it was released on September 2014, which makes it just a little over six months old. While the executive has not given any timeline for the release of the smartphone, it is expected that the company will be looking to stick to its original timeline for when it had released the Moto X 2014.

As for the hardware specifications that will make up the smartphone, Osterloh did not care to comment on that front. Since the handset will belong to the high-end category of devices, we can expect the Moto X 2015 to be equipped with a Snapdragon 810, 3 GB of RAM and will be running Google’s Android Lollipop 5.1 update ‘out of the box’. Similar to the company’s previous flagship handsets, it is expected that the Moto X 2015 will be void of a microSD slot.

While that is all the information available on the upcoming smartphone, more information will be published as soon as it becomes available.