What is probably the biggest leak in the (admittedly short) history of the Xe GPU has just occurred. The good folks over at DigitalTrends managed to get their hands on some internal presentations by the Intel GPU design team and it confirms what we have long suspected: Intel is taking a leaf out of AMD's book and working on an MCM based graphics card. In the documents also lurks an absolute monstrosity: a graphics card with 4 seperate tiles drawing up to 500W!

Intel is pulling a Zen on its GPUs: Monster Intel Xe GPU with 500W power draw and 4 Xe-based tiles leaked in internal documentation

Intel has been keeping a fairly low profile on its Xe GPU efforts - making no bold claims and only revealing things here and there. That might no longer be an option for the company considering what is probably the mother of all leaks just spilled from an unlikely source. The documents obtained by DT show that the company is not only working on building up its SDV and DG1 proof of concept GPUs, but aims to bring the Zen philosophy to GPUs. I am talking Multi-Chip-Modules and a graphics card constructed with not one but multiple dies on the package. AMD has yet to embrace MCM for its GPU side of things and it looks like Intel might actually beat it there.

This isn't in itself particularly surprising considering Jim Keller (the legendary chip architect that practically invented Zen) and Raja Koduri (former brains of the operation of the GPU side of things) are with Intel now. If they can bring some of their AMD mojo to work at Intel's GPU side then AMD might actually have a Zen moment of its own - akin to what Intel has been experiencing for the past year. Here is the first slide from the leaked deck:

Intel is planning to enter multiple GPU markets including media processing, remote graphics, analytics, AR/VR, machine learning (of course) and HPC. Gaming is part of the Remote Graphics segment if you are wondering and this is basically the discrete and mainstream side of things. This also confirms the Arctic Sound codename by the way. This particular slide doesn't reveal much but this is why we have this second slide: 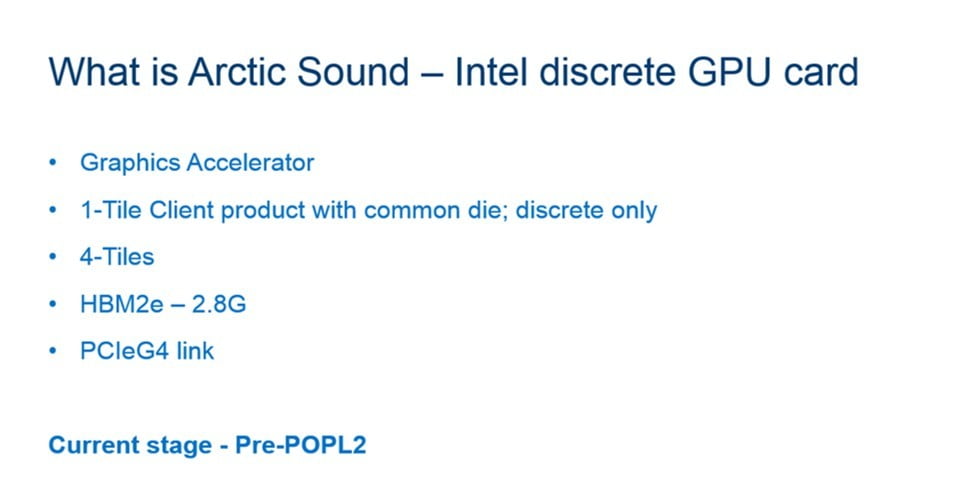 This slide lists the extent of ambition of Intel's Xe side. The company plans to start out with a 1 Tile client, but eventually move on to 4 Tiles. [Ed's note: Anyone remember my April Fools prank? Looks like there was quite a bit of truth in there.] I have seen some estimations of what these tiles constitute in terms of EUs but I will say right here that any such estimations are grossly misleading and almost certainly wrong.

If we assume TGL GFX/DG1 to constitute 1 Tile than you are looking at 4096 cores for the four-core variants. A 4096 core GPU at 500W makes no sense and this is because nowhere in the slides does Intel actually say that all the tiles will be made equal. Chances are you are looking at various tile sizes and the 4-core part will actually be a die that is traditionally impossible to manufacture on a single die. Economies of scale on MCM GPUs kick in very fast and this would be the perfect chance for Intel to lower costs even further considering it owns its own foundry. Even if it decides to outsource the fabbing to TSMC, this is still going to be a very economical product. I would be very surprised (although it is possible) if the 4-Tile variant actually has 512 EUs with 8 cores each for a total of 4096 cores. 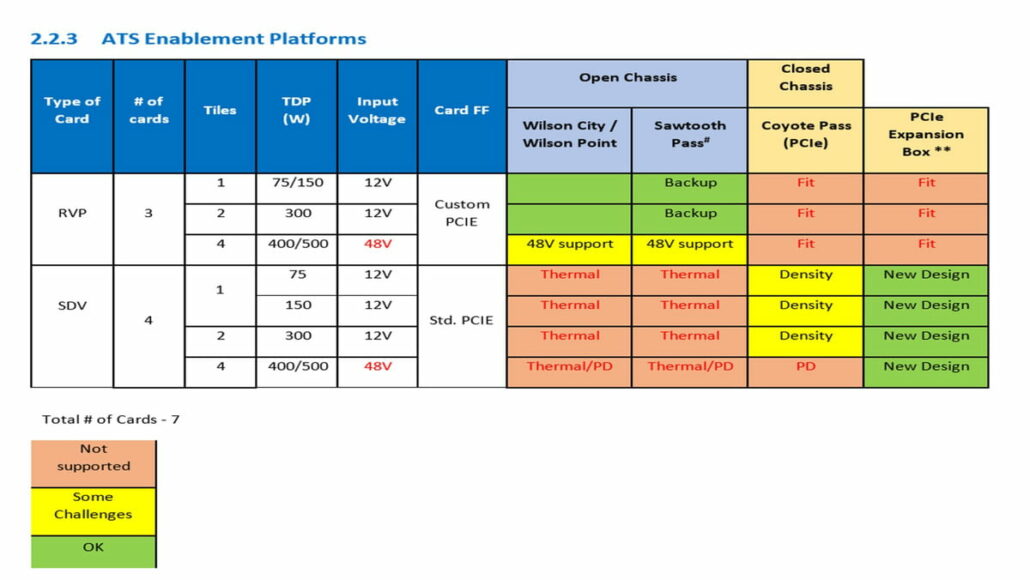 Speaking of lineup, the company is preparing a total of 4 SDV Xe graphics cards. Iniitally there will be three as part of the RVP or Reference Validation Platform (think mainstream proof of concept) and will scale all the way up to 4 tiles. This is most likely the engineering platform only for internal testing as it is utilizing a custom PCIe type (500W slightly exceeds the specifications for PCIe seeing PCIe 4.0 is capped at 300W).

Then we have SDV or Software Development Vehicles which are also prototypes, but I would say much closer to the final mainstream product. These appear to use standard PCIe although it is not clear how Intel plans to manage that considering they are still drawing 500W from the wall. Maybe Intel plans to augment its GPUs in a separate enclosure or through some auxiliary PSU. The fact that there is a PCIe expansion box present in the table and the SDV all list "new design" seems to lend credence to this theory. The 500W variant also pulls 48V in total. This is absolutely insane as far as DC goes. To put this into context, most computer Uninterruptible Power Supply (UPS) units usually use a 48V input (and can output over 2000W of power).

If Intel succeeds in this absolutely crazy plan, things are going to get very very exciting for gamers in 2021. MCM is the future of computing as AMD has already proved and looks like Intel might actually beat them to the punch.