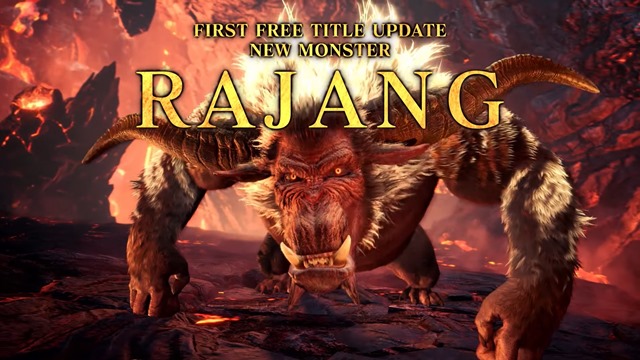 Monster Hunter World Iceborne will receive free updates after launch, and the first one received its first details today.

With a new trailer, Capcom confirmed that the first Iceborne free update will add Rajang to the game. The monster, which originally appeared in Monster Hunter 2, uses dangerous electricity attacks.

MHW Iceborne promises to expand the Monster Hunter World experience with new locations, monsters, and challenges. Kai had the chance to try it out at this year's E3, noting how the new tools given by the expansion are extremely helpful.

The Hunters each have a couple of new tools at their disposal in Monster Hunter World Iceborne that will make navigation a breeze in the more treacherous climates. The first is a new Clutch Claw attachment that can help with grappling onto a monster and setting up to ride and stagger the great wyverns. I could certainly see this tool getting a lot of use with the heavier blunt weapons that need a second opportunity at getting up close and personal to Tigrex’s face and smash them with a hammer.

The other novel tool is finally being able to put those tailraider skills to use and tame select smaller beasts as mounts that can otherwise brave the frigid landscape better than any human. Getting carted and knocked back to the base camp is an unfortunate reality for most monster hunts and being able to get back into the faction faster is nothing less than a positive improvement for the already accessible entry. Beyond these two upgrades, Monster Hunter World Iceborne’s combat is largely untouched and should be immediately successful for anyone that’s wanting to see the new continent whether they’re longtime veterans or only just briefly adventured out with the Fifth Fleet.

Monster Hunter World Iceborne launches on PS4 and Xbox One on September 9th. The expansion releases on PC early next year.