DirectX 12 is targeted at forming the new API standard after DirectX 11. Arguably inspired from Mantle, the launch of Microsoft's low level API is certainly something gamers look forward to. However, from the looks of it, they are going to have to wait a while. It was previously assumed and has now been confirmed that DX12 will be launching in 2015 alongside Windows 10. 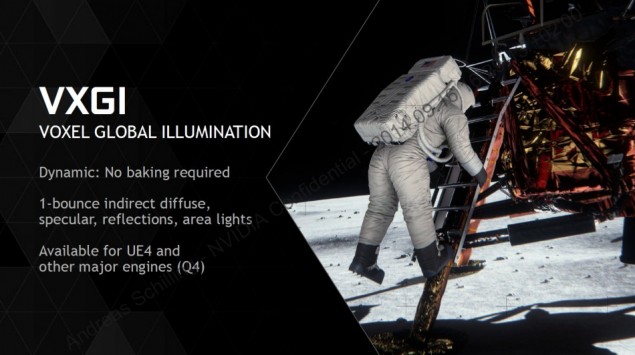 Direct3D 12 is the implementation of the famous API that should have come much earlier but didn't; because of either lack of innovation or monopolistic stagnancy. It is targeted at reducing the CPU Overhead primarily while introducing new hardware level features and it is worth mentioning that Nvidia is also introducing its own DX12 (and maybe 11.3) feature which is the Voxel Based Global Illumination standard (VXGI). This is a pseudo-alternative to Ray Tracing and produces close-to-photo realistic graphics using tiny cubes to calculate global illumination or lightning. The effect is pretty remarkable but the technique is very expensive to utilize on GPUs. This is why, its basically targeted towards the high end cards such as the Maxwell GTX 980 and 970.

DirectX 12 is also accompanied by DX11.3, which will contain most of the features of DX12: Ordered rasterizer View, Typed UAV Load, Volume Tiled Resources, Conservative grid rasterization minus VXGI and the low level implementation. We are still not sure where 11.3 stands in the grand scheme of things since Nvidia and AMD have yet to endorse it but if DX12 is launching with Windows 10 then 11.3 could end up being the primary API for older cards (anything not Maxwell or Pirate Islands). We have previously covered 11.3's comparison with DirectX12 in detail so I won't go there.

Now interestingly, DX12 will not release alone. At launch there will be multiple titles that support the new DirectX12 if Microsoft is to be believed and Unreal Engine 4 is already in early access to fully understand and exploit the new API. This would mean we should ave a decent selection of games to thoroughly judge the API and view (hopefully) unbiased results instead of relying on company benches. A successful launch of the same will also ensure much needed migration from Windows 7 to Windows 10, something that Microsoft now desperately needs.

#Microsoft DX12 will launch with Window 10 and will have a handful of titles at the time. http://t.co/V0GvsCgLPV