Microsoft (NASDAQ:MSFT) has delivered their results for the quarter ending September 30, 2020, and it was another hot three months for the company. Despite, or perhaps partly because of, the ongoing COVID-19 pandemic, Microsoft continued to see significant growth in both their Intelligent Cloud and Business Productivity sectors. Really, with the exception of Windows OEM sales, which were up earlier this year due to the Microsoft discontinuing Windows 7 support, every aspect of the company’s business was up in Q1, usually by double digits.

Microsoft scooped up revenue of $37.2 billion and net income of $13.9 billion during Q1 2021, a respectable 12 percent year on year increase for revenue and a whopping 30 percent increase for income. Earnings per share were $1.82, which is above the $1.53 per share analysts were expecting and 32 percent up compared to the same period the previous year. As of the publishing of this article, Microsoft stock was up around 2 percent in after-hours trading. 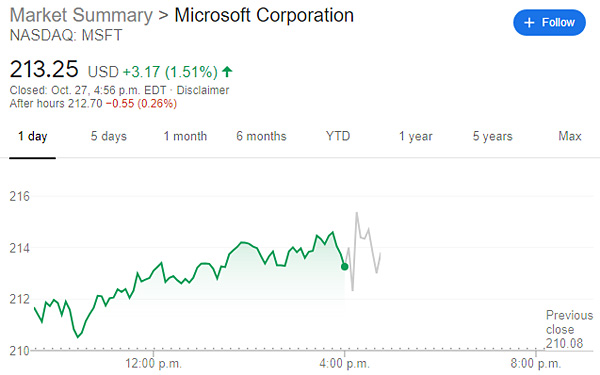 Microsoft Continues to Help the World Work and Play from Home

Microsoft’s rosy earnings report comes courtesy of the usual suspects, namely business productivity services like Office 365 and Dynamics 365 and Azure, as widespread working from home continues to be a pandemic reality. As you would expect, Azure usage is up, with Intelligent Cloud revenue rising 20 percent year-on-year to $13 billion. Naturally, products helpful in setting up new home offices are also doing well, with Office 365 consumer revenue up 13 percent, Office 365 commercial revenue up 9 percent, and Dynamics 365 revenue up 19 percent.

Xbox Revs Up for Next Gen

One of the surprise bright spots of this earnings report was the Xbox division, which has been in a slump for some time now. Xbox revenue was up 30 percent year-on-year, driven by a particularly busy quarter that saw Microsoft release a slate of new games, including Microsoft Flight Simulator, Wasteland 3, Battletoads, Grounded, and Tell Me Why. All these games were available through Xbox Game Pass, and this quarter’s boost in revenue shows the subscription service can be successful if it's provided with a steady stream of quality exclusive content. Microsoft has to be happy about the Q1 Xbox results given the fact they’re launching their new consoles, the Xbox Series X and S, in Q2.

As we’ve established, Microsoft is particularly well-prepared to weather the current COVID-19 storm. In fact, businesses being forced to embrace remote work plays right into the future Microsoft seems to envision for the world. As mentioned, the current quarter will also see the release of new Xbox consoles, and perhaps the beginning of a new period of growth for Microsoft’s gaming business. It’s hard to disagree with Microsoft CEO Satya Nadella’s rather sunny predictions for the future…

The next decade of economic performance for every business will be defined by the speed of their digital transformation. We are innovating across our full modern tech stack to help our customers in every industry improve time to value, increase agility, and reduce costs.

Of course, nothing can be 100 percent certain these days, and Microsoft will undoubtedly face logistical obstacles as they try to launch new physical Xbox and Surface products this year, but I don’t expect these challenges to significantly impact the company’s bottom line. Microsoft continues to be a rock-solid bet.