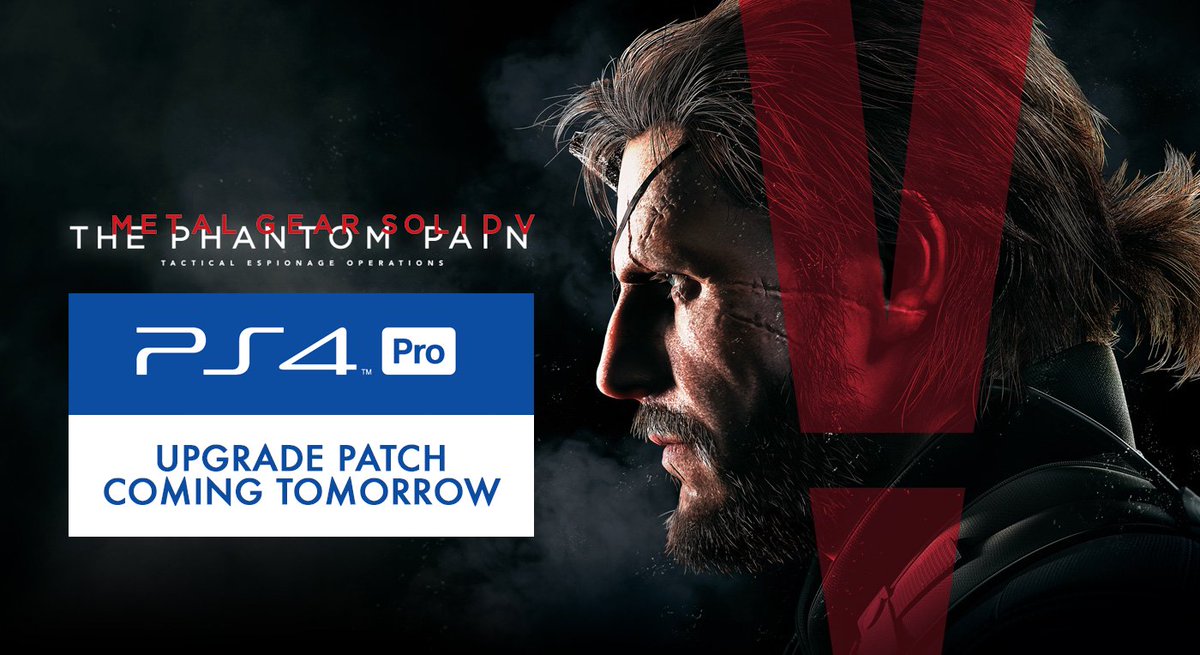 [Update] According to the official Meta Gear Twitter account, the PS4 Pro patch increases the game resolution on a 4k screen while also improving the framerate. Those on a 1080p screen will also benefit from an increased framerate.

Even if you have a 1080p screen, you’ll enjoy the improved #MGSVTPP performance thanks to today’s patch.

Patch notes are minimal aside from a short description that mentions enhanced performance on Sony’s upgraded PS4 console.

Metal Gear Solid V: The Phantom Pain is currently free for PS Plus subscribers. The game will also be available for Xbox owners through the Xbox Game Pass in November, but support for Microsoft’s upcoming Xbox One X hasn’t been announced yet.

KONAMI’s groundbreaking title sets a new standard in stealth-action, with the series’ famed sneaking elements greatly expanded within the sprawling play area. A host of new characters – both allies and enemies – tell a story driven by revenge, as franchise protagonist Big Boss enters a series of battlefields following the deaths of his colleagues. Central to the game is a hideously disfigured adversary known as Skull Face, while the ongoing conflict also introduces new, iconic characters, such as the mysterious Quiet – a mute female sniper with incredible abilities.

Tactical elements are also added to the game via METAL GEAR SOLID V: THE PHANTOM PAIN’s new Mother Base system. Players begin with a small-scale off-shore rig that serves as a base for recruits – the Diamond Dogs. The Mother Base can be customized and expanded using liberated items and personnel. Players use an enhanced version of the innovative Fulton system pioneered in METAL GEAR SOLID: PEACE WALKER to airlift guards, vehicles, weapons, raw materials and kit, to their base, where the staff will use these resources to develop the base to the user’s specifications. The game also includes a massively multi-player online mode - the Forward Operating Base (FOB) system. FOBs act as an extension to your Mother Base and can increase profit, resources and manpower. However, constructing FOBs does come with certain risks. Since FOBs are built in remote locations away from your Mother Base they are susceptible to attack by other rival private forces. Other players online may target and attempt to steal resources and manpower from your FOBs, and in turn, you’ll be able to invade theirs. To minimize those threats though players can implement various security measures to respond to intrusions.