Before the launch of smartphones, tablets or the components that power them up, several leaks concerning the details of the aforementioned products sprout up, which gives speculation to a variety of different theories that could be taking place inside the mind of the reader. On this occasion, Gizchina was able to get a hold of the specifications of Taiwanese semi-conductor manufacturing company and its upcoming SoC named MT8163. Thanks to the latest leak, it is expected that the upcoming mobile GPU is going to belong to AMD.

According to the images captured from benchmarking program named GFXbench, MT8163 is going to be running a quad-core processor belonging to ARM Cortex-A53, and while the clock speed of the CPU is currently not known, it can be speculated that it won’t be high since Cortex-A53 are generally lower performing processors that are paired up with high performing ones such as the Cortex-A57 or even Cortex-A72 as part of ARM’s big.LITTLE architecture. 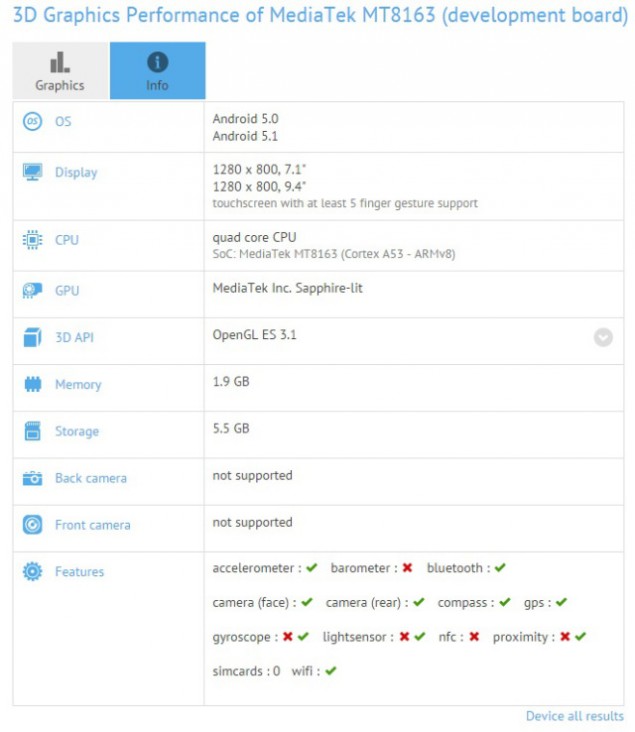 Could it be AMD’s mobile GPU running inside the MT8163?

However, the unique part of the MT8163 was not the quad-core processor; it was the mobile GPU running inside the SoC. According to the images, the GPU is listed as MediaTek Inc. Sapphire-lit and while we know for a fact that there is no mention of the word ‘AMD’, we must not forget that Sapphire happens to be a sub-vendor for the graphics processor manufacturing firm. However, if that is the case, then why was Sapphire’s name present in the benchmarking report and not AMD’s? Can Sapphire be a completely different company than the one we are currently being led to believe? All of those questions have a possibility, so now, we will come to the other details of the benchmarking report.

According to the scores obtained by MediaTek’s MT6183; they happen to possess a very erratic nature. In Manhattan 3.1, the score obtained by the GPU allowed it to be on par with ARM’s Mali-T760 GPU (which T760 has not been confirmed because the number of cores were not present right next to the mobile GPU’s model name). However, in the T-Rex test, the GPU managed to get a very poor score, leading us to believe that it was not what we suspected it would be. 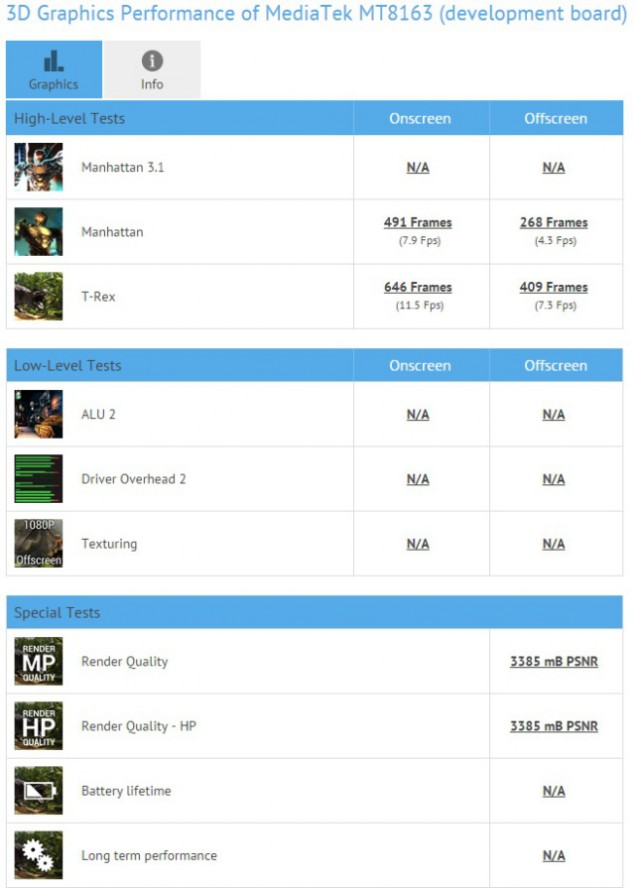 However, MediaTek has not fully disclosed the specifications of its MT8163 SoC. Earlier this year, it had been reported that the mobile chipset maker and AMD were teaming up in order to roll out mobile GPUs for smartphones. Could it be that both manufacturers are finally starting to test their collaborative efforts? Let us hope that MT8163 happens to be the first SoC that happens to sport that processor.