When it comes to smartphone chipsets and processors, a couple of manufacturers come to mind. While traditionally Qualcomm has held a tight grip over the market, Samsung's recent launch of the 14 nm Exynos 7420 Octa managed to gain the Korean electronics giant a strong place as well. But while Qualcomm and Samsung fight it out for the throne, MediaTek seems to be taking its time to make its way slowly among the big fish.

While MediaTek's CorePilot 1.0 was limited to heterogeneous multi processing for CPUs only and enabled performance improvements and power management, Core Pilot 2.0 now ends up adding the GPU to the mix as well. This combination of the CPU and GPU allows up to 146% performance enhancement and 18% power consumption savings through efficient execution of OpenCL programs. It'll also free programmers from component restrictions when designing algorithms and will instead allow them to focus on other areas. Device Fusion decides whether an OpenCL program is for the CPU, GPU or both, and then proceed towards assignment. 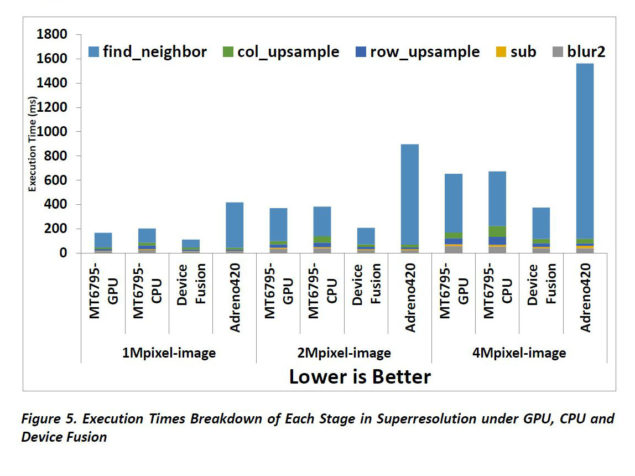 MediaTek has also presented us with a test showing Core Pilot 2.0's capabilities and compared three GPUs, its MT6795, a 'Device Fusion' GPU and the Adreno 420. As seen in the image above, when running an algorithm of Superresolution, which increases image resolution and extracts significant details from an image, the MT6795 manages to take down the Adreno 420 but looses out to the unknown Device Fusion GPU. It manages to show promising capabilities of Core Pilot 2.0 but how well will it end up faring against Qualcomm's Adreno 430 still remains to be known. A promising release by MediaTek anyways and with the way things seem to be working out with the manufacturer, we could expect some surprises from its end too. Stay tuned, we'll keep you updated and let us know what you think in the comments section.