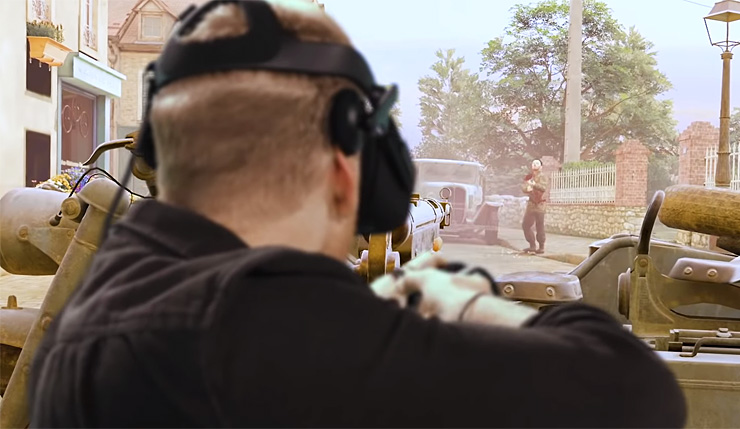 It’s been over seven years since the release of the last Medal of Honor game, leading many to suspect the series had been permanently done in by Call of Duty. Well, not so fast! Today at the Oculus Connect 6 event, Medal of Honor: Above and Beyond was announced. The game takes the action back to World War II, casting players as an Allied OSS agent, and looks to include more exploratory and interactive elements than your typical military shooter. You can check out a quick trailer, below.

Medal of Honor: Above and Beyond is being developed by the folks at Respawn Entertainment. It’s been known since late 2017 (shortly before the studio was purchased by EA) that Respawn was working on a project with Oculus, and now we know what it is! According to Oculus this is likely the most expensive Oculus exclusive made to date. Here are some more details about the game:

Medal of Honor: Above and Beyond brings the historic battlefields of World War II back to the forefront for an epic AAA experience like no other. You’ll play as an Allied agent of the Office of Strategic Services (OSS), tasked with infiltrating, outgunning, and outsmarting the Nazi war machine. And as you complete your tour of duty across Europe, you’ll collaborate with the French Resistance, working to sabotage Nazi operations from behind enemy lines.

In addition to both a full narrative campaign and multiplayer modes, Medal of Honor: Above and Beyond includes a unique story gallery, letting you sit with WWII veterans and survivors to hear their stories while witnessing first-hand the events and locations that have shaped our history. Thanks to this historic authenticity, gameplay mechanics and props are placed within their proper context. As a game, it entertains, but it also strives to make you pause and reflect on the events of the past and how they helped give rise to the world we know today. And the immersive nature of VR makes it all possible, letting players experience the sights and sounds of the battlefield as if you were actually there.

The historical approach is interesting – we’ll just have to wait and see if this new Medal of Honor gets the stamp of approval from WWII nuts. Overall, the game looks pretty solid, and Respawn has certainly earned the benefit of the doubt.

Medal of Honor: Above and Beyond launches exclusively on the Oculus Rift in 2020. No word yet on whether the game will come to other VR platforms, but come on, this is an EA-published game. It’s bound to happen eventually.