Rockstar Games revealed a launch trailer for the much anticipated first DLC for Max Payne 3, The Local Justice Pack. The new DLC will be focused on the Multiplayer Element offered by Max Payne 3. There will some new maps, a new weapon and an entirely new faction to play as. 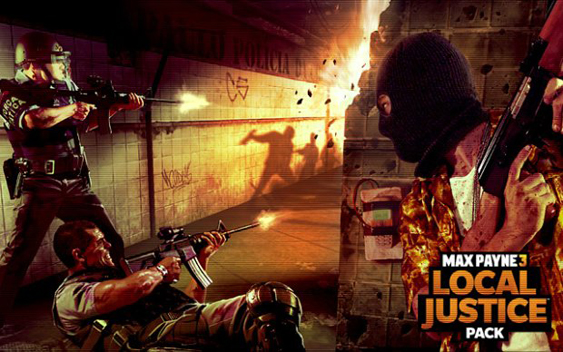 On 1st May, 2012, Rockstar announced that Max Payne 3 will receive seven different add-on packs for the game which the players would be able to buy through Playstation Network and Xbox Live. Today, Rockstar released a Launch trailer for the latest DLC and set a date to it to place it on the map. The "Local Justice" DLC will be available on July 3rd for the Xbox 360 and Sony Playstation 3 and The PC variant of the DLC will be launching with a short delay of 10 days, on 17th July, 2012.

The brand new DLC delivers with 3 new maps for the Max Payne 3 multiplayer mode, the maps are made from parts of the intense final chapters of the single player mode. There is addition of a new weapon with the pack, the M4 assault rifle. The new playable faction is the São Paulo Police Faction, which come with avatar customization options.

Local Justice will be available for purchase for a discounted price of 480 Microsoft Points, or $5.99 on PSN and PC. After its launch week, the DLC would be raised to its normal rate of 640 MP on XBL, or $7.99 on PSN and PC. Or if you were clever enough to get a Rockstar Pass, you will enjoy the DLC for free at launch. The DLC Launches July 3rd for the XBOX 360 and the PS3 and July 17th for the PC Version.