The ASUS ROG MARS 760 features dual Kepler GK104 cores on a single PCB. Not an achievement in itself, but what really took us by surprise was its performance. The MARS 760 apparently has 2304 cores and outperforms the GTX Titan ( 2688) in a number of cases.

The approximate performance difference between the MARS 760 and the GTX Titan is 7-14%. However, its not just the frame increase you are getting when opting for the 760 Mars, Its Stability. More frames are desirable sure, but a stable frame rate is even more coveted. Observe the benchmarks below and you will see what i am talking about. In some cases the Mars 760 maintains an almost 400% more stable frame rate than the titan. 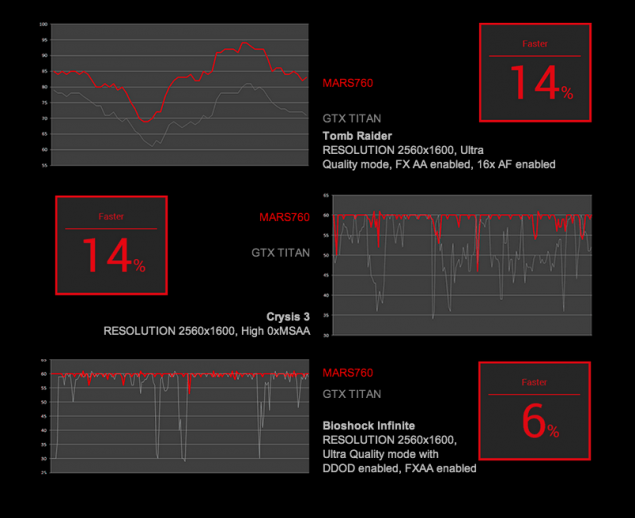 Naturally the reason the result is surprising is that the two cores of ASUS ROG MARS 760 combined have less cores than the Titan? Sure, the fact that the Mars 760 has two cores with 1152 cores each ( 2304 total) is obvious reason for the highly stable frame rate. However what about peak frames? It can be clearly seen that in the Tomb Raider benches the 760 mars actually has more peak frames than the GTX Titan. This the thing that takes us most by surprise. It could be that the dual cores are using a B1 revision. Even accounting for the B1 Revision such a leap is unsettling to the eye. Its almost as if cores don't mean anything at all.

#ASUS MARS 760 beats the Titan with less Cores? Either i am getting old or secret sauce ftw. http://t.co/Jd29uWaaLJ