As the Iphone 4 comes closer to its release, news of people camping outside Apple stores is starting to come out. One person in particular has camped outside the Apple Store in Dallas. 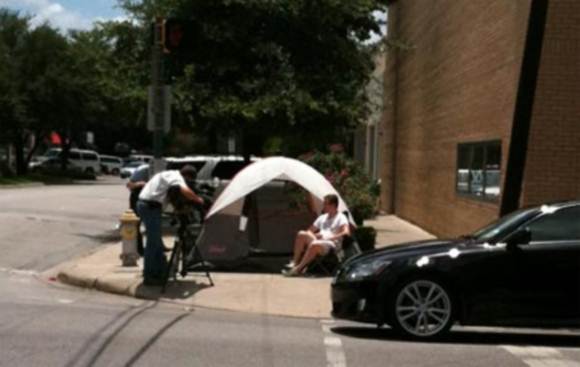 Although Justin has pre-ordered an Iphone like many other people, he though camping outside the Apple store would be a good idea since he had remained at home for some years! Despite the  heat, he is camping at the store in his tent with a week's worth of provisions while people on the internet are calling him an "idiot" and "a publicity hound"

Some would say I am crazy, but I say I’m a very determined fan. In fact I just might be one the biggest Apple fans you will actually meet. I have been the first costumer[sic] for this store since 2008 when the iPhone 3G was released.

Normally I only camp out over night, but since I do not work due to the fact I am disabled with a seizure disorder and I am not in school at the point, I figure I just make it a fun experience and do it for a week.

Yes I did reserve a phone, but again, I’m doing it for a fun experience. I haven’t had a trip or vacation in past 10 years so I figured I make it a full week camping trip.