Mad Catz has announced a new S.T.R.I.K.E.M keyboard for mobile gaming. Mad Catz has been rolling out very practical and neat keyboards for PC gaming from quite some time now. Mad catz is now adding a new gadget in its GameSmart line for portable devices.

Mad Catz has revealed its latest gaming keyboard in the S.T.R.I.K.E keyboard series, S.T.R.I.K.E.M gaming keyboard is the latest addition in Mad Catz’s GameSmart line of mobile offerings. The keyboard is specially designed for gaming on portable devices. It will be available in three colors i.e. Red, Black and White. The Keyboard would perhaps work as an add-on with Mad catz’s M.O.J.O, a micro game console for android which would be able to stream PC content like games and videos to living room television.

Just like all other GameSmart devices, the S.T.R.I.K.E.M keyboard comes with Bluetooth which provides wireless connectivity, it also supports NFC connectivity that allow users to pair the device with NFC supported devices. Its also has an Optical Finger Navigation mouse sensor with dedicated mouse buttons and the micro P.U.L.S.E scissor keys. Other features include illuminated backlit keys, dedicated media buttons, on-board memory for easy configuration of various combinations of macro commands. 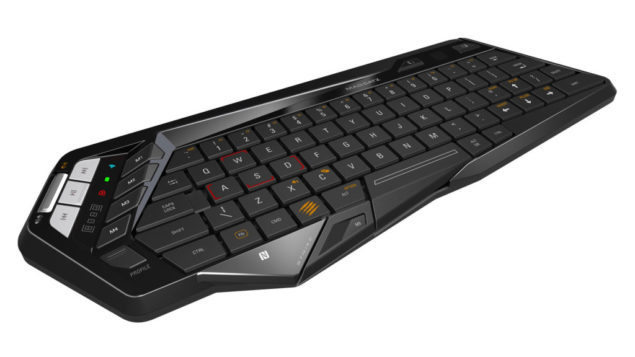 “The S.T.R.I.K.E. range has proven to resonate with gamers, and we are excited to extend the brand into mobile gaming with a technically advanced product, which combines impressive features with striking aesthetics. We believe the S.T.R.I.K.E.M fits perfectly with our long-term strategy of designing innovative products for passionate gamers across all gaming platforms.”

No information has been given on pricing details. The keyboard would hit the market in time for holiday season this year. This is all the information that has been provided by the press release till now.