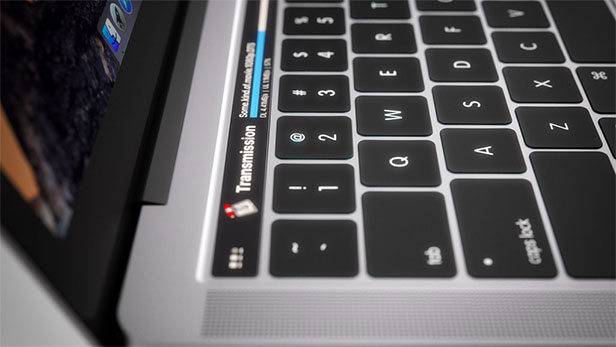 If a MacBook Pro 2016 would end up becoming like this, then we will definitely be stuck in paradise. Apple, it is high time that you took pointers from this concept because these images look absolutely stupendous.

Jumping straight to the intricate details, one of the things that we noticed about this feature is that not only does it replaces the physical function keys, it also brings about more functionality, along with displaying additional information present on that screen. If you turn your attention to the second image, you will be able to see that the app Spotify is being played, which could mean that users could control the app from within that touch panel rather than using the display.

If such a feature exists, then physical keys could certainly look obsolete in the face of more intuitive functions. It also possible that aside from the OLED panel, the MacBook Pro 2016 family sports four Type-C USB ports, along with new metal injection molded hinges as reported earlier this year. In our previous report, Skylake processors will boost CPU speeds by 10 to 20 percent, and integrated graphics chips by 16 to 41 percent. Additional info also suggests that switching to Skylake laptops could add as much 30 percent more battery life. Thanks to this upgraded performance, we expect that the resolution across these notebooks will also be increased, since these chips will easily be able to push all those pixels across the screen.

While we say this, keep in mind that Intel also released a family of Xeon mobile processors (at least the 15-inch models), so these chips could also end up powering the MacBook Pro lineup in the near future. The processors will definitely define the raw processing capabilities of this new lineup, but it could also mean that Apple would be forced to exponentially increase the pricing of its notebook family.

Additionally, Apple does not like to skimp out on incorporating these notebooks with fast PCIe flash storage that deliver blistering read and write speeds, so we could be looking at a pretty expensive product lineup in the foreseeable future.

What is your impression of the latest MacBook Pro 2016 gallery? Let us know your views immediately.