Lord of the Rings Online an MMORPG (Massive Multiplayer Online Role Playing Game) has been out for 3 years now and even though its not as popular as World of Warcraft the game is great to play and this is perhaps one of the first free to play MMORPG's out there which actually has backing up from a big wig company (Warner Bros.) I for one am definitely signing up for the beta and I hope i get in it, otherwise I'll just wait till the beta is over.

I don't know much about the game but what I do know is it wasn't a smashing success like WoW, it was more of a mediocre success, WB is possibly doing this to encourage to a larger audience who don't want to pay to play but will pay for stuff like uncapped gold, bags etc. Graphic wise the game is very impressive and with its graphics being updated to direct-x 11 i can't wait to see what the game looks like after it.

"Warner Bros. Interactive Entertainment is bringing quality games based on The Lord of the Rings to multiple platforms, and the franchise's expansive adventure story lends itself perfectly for LotRO free-to-play, giving a wide range of players the opportunity to experience the game," said Warner Bros. senior VP Jeff Junge. "We are focused on expanding our game franchises onto new digital platforms to maximize quality experiences for gamers worldwide and LotRO's new model is a great leading example of this." 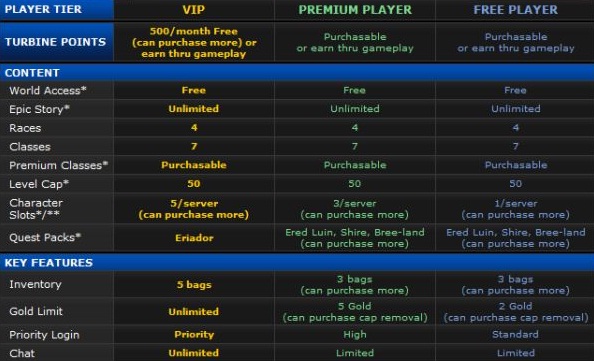 Players can register now for a beta (starting off on June 16) of the new LotRO on the game's official website. There you'll also find more details about the different player tiers you see in the image above. Players can move from "Free Player" to "Premium Player" status by simply making a purchase of Turbine Points (the in-game store currency). Some of the major differences between tiers include the number of characters you can create, a cap on how much gold you can have, and a lack of access to Monster Play (one of the game's PvP options) to the lower two tiers. One new feature that the game will see added this year is support for DirectX 11, according to Turbine's community manager, but there's no word on whether this, too, will be a subscriber-only feature.

The new free-to-play version of LotRO is scheduled for release this fall. For a look at what you can likely expect from the F2P aspect of the game, check out our hands-on coverage of D&D Online from last summer here and here.