The Legend of Zelda: Breath of the Wild Hands-On Preview – So Good 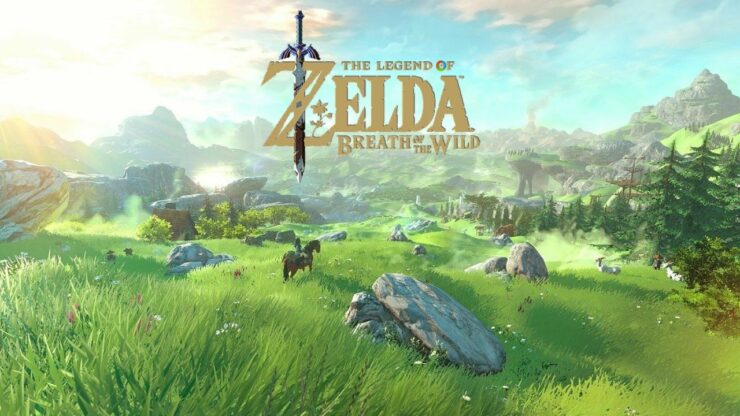 I find it difficult to put into words how shocked and impressed I am. Make no mistake, there are caveats to my excitement, but it’s become clear to me during my short play with the game that this is a game changer in every imaginable way. At one point I wasn’t even sure I was playing Zelda anymore – that’s how radically new and different Breath of the Wild does things. This isn’t the Zelda you grew up with – it’s bigger, bolder, and more adventurous than ever.
I started my game in a small wood where the game lets you get to grips with new mechanics – some items lay on the floor ready for the taking, and there’s a lit bonfire set to goad you into playing with those flashy new fire mechanics. Here’s the first thing that hit me: you can climb pretty much everything and anything. Skyward Sword’s stamina gauge makes a return, limiting quite how far you can run, climb and swim, ensuring you’re not going to be making any crazy journeys over absurd mountain ranges from the get-go.
I quickly climb a few trees and scout the landscape from the top – it’s huge. Massive. Considerably bigger than the largest field from Twilight Princess, and far more densely packed with things to do, see and play with. I sneak around to a Bokoblin camp unseen and unheard, dispatching one of their lookouts before disappearing into the woods with all their weaponry. It’s in moments like this you can see where and how influence from across the series have manifested themselves in The Legend of Zelda: Breath of the Wild. Wind Waker messed about with enemy weapons, allowing Link to steal them, and used this to good effect in the early Forsaken Fortress section of the game. But where Wind Waker fell short of making the most of this feature, Breath of the Wild truly delivers. Everything from your basic shield, sword and even bow is breakable and you must scavenge the landscape for new weapons constantly – Link must do anything to survive, and the game makes it clear that this is a big factor.

Survival is everything, but how did this play out in past Zelda games? Well, in previous titles health was everywhere. Hidden in every patch of grass, pots, can be purchased or made in the form of medicine or milk drinks… But it’s a much bigger deal now. Later Zelda games added a Hero Mode, where health wouldn’t spawn out in the open, and just surviving was a much more trying task; but none of those come anywhere close to Breath of the Wild. In order to refill your life, you must assume the role of a hunter gatherer, a man tasked with survival and nothing more. Boars roam the open fields and can be hunted for meat, mushrooms grow openly everywhere and can be eaten, apples can be picked from trees, and pretty much all of this can be cooked at a cooking pot, to create kebabs, seared steaks and more. These more often than not grant hearts – more for better prepared food – or even temporary health boosts. 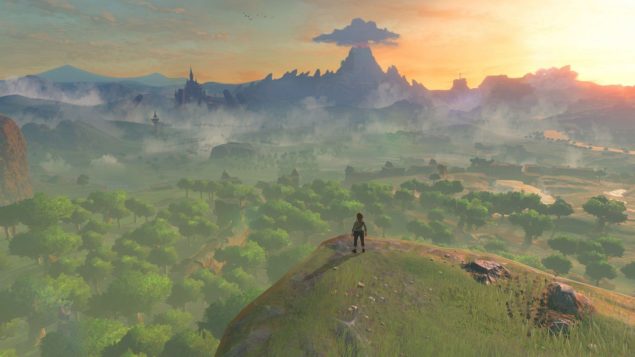 But health is hardly the only thing Link needs to concern himself with, as there’s also the elements to combat. Two new gauges appear in the bottom right of the screen, a temperature gauge and a new sound monitor. The temperature gauge is obviously there to let you know how hot or cold it is in the land of Hyrule, and how this effects Link. Mount Hylia tempted me up its snowy peaks early on, but unfortunately I didn’t actually manage to recover any decent clothes to wear – this led to a constant battle where the cold winds chipped away at my health and I had to use health items to keep it topped up. I stumble across another Bokoblin encampment that nearly wipes me out, but take them down a peg and then rest by the fire. I take one of the wooden Bokoblin clubs, wave it about in their camp’s bonfire where it sets alight. While there I decide to drop in a couple of steaks and apples to warm them and increase the health bonus they offer when eaten. I take the burning club and venture up the mountain – the warmth of the fire preventing hypothermia from setting in. “This is so much more than just The Legend of Zelda”, I think to myself.
In another playthrough of the demo I decide to head towards the Temple of Time and summon Wolf Link into the game. Wolf Link is summoned with the amiibo, and essentially just follows you about the world, taking bites out of enemies whenever he has the chance. Inside the temple there’s an altar decorated with Loftwing symbols – the pelican-like birds from Skyward Sword. Deeper inside is the statue of the Goddess Hylia, the same one from Skyward Sword, standing tall over everything within the temple. It’s a wreck, it’s abandoned, and it has an eerie presence that repeats more than once in the demo.
I’ve said it before, but you really can climb pretty much anything. There’s a ladder going up the side of the temple should you wish to use it, but find a couple of convenient rest points on the way (for your stamina) and you can easily just climb the temple’s stone walls to get to the roof. The view is breathtaking, stunning, and makes me wish more of Hyrule was open for me to explore.
In the overworld you can find everything from the shrines, home to ancient members of the Shiekah tribe, acting as miniature dungeons, to smaller enemy encampments, to full on boss encounters with large health bars and everything – a first for the series. The amount of challenges and fascinating areas I could go and explore was a little overwhelming, honestly, and all this without even a dungeon. 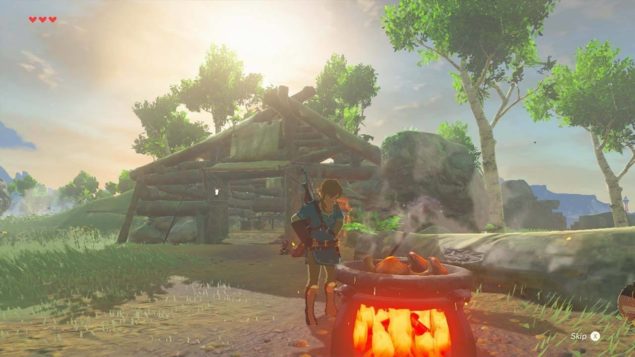 It’s obvious that players will spend days or even weeks just exploring the land of Hyrule, rediscovering what they thought was already so familiar. I played the demo maybe five or six times (I couldn’t stop myself) and each time I did something new, saw something new, and saw something that I wanted to do – there was just never enough time. Without even approaching anything that resembled a main storyline I already had so much to keep me entertained. I discovered a hidden Korok, I accidentally blew up a tree with my bombs, which toppled it and rewarded me with a leaf that works similarly to the Deku Leaf from Wind Waker, allowing Link to blow up a mighty gale and even propel a boat across an icy lake. This is apparently just 2% of the total overworld and already I’m blown away by all of the potential, all of the possibilities.
And then there’s the caveats… On Wii U, at least, the game requires optimization. Frame rate was sub-30 fairly often, and the resolution barely looked like 720p… And it speaks volumes that these issues did not impact my experience one bit. When it was first displayed to me at the event I was dubious, and even wrote in my notes “Omg the frame rate”. But not once did it ever genuinely make me think twice. FPS drops are only really an issue when the game has water or fire effects being used in large measures, and even then it usually dips for about a second, and quickly becomes playable again.
So with that big paragraph critiquing performance out of the way – gosh, what a stunner. The way the sunlight plays off of blades of grass, the way sunsets color the entire game world in an orange hue, the subtle reflections from the water’s surface, the almost liquid appearance of flames and the way it dances… Utter magic. Poetry in motion. The Wii U is punching way above its weight with Breath of the Wild, but if they manage to stabilize performance by release day then there’s absolutely no doubt that it’ll be the prettiest game on Wii U – even with the 720p presentation.
So, should you be excited for Breath of the Wild? Yes. Absolutely yes. As someone who has in the past hesitated to recommend Zelda games to my larger group of friends, I am so overwhelmingly pleased to say that every one of my pals should play and enjoy this. It feels like a Western open world experience with the polish of a Nintendo title – in fact, scratch that, it feels better and denser than a normal Nintendo title. Breath of the Wild is the most ambitious game Nintendo has ever made, by a pretty wide margin, and if the rest of the game offers the kind of childlike joy that I got from the demo, then it won’t just be the Wii U’s best game, it won’t just be Game of the Year – this could be Game of the Generation.