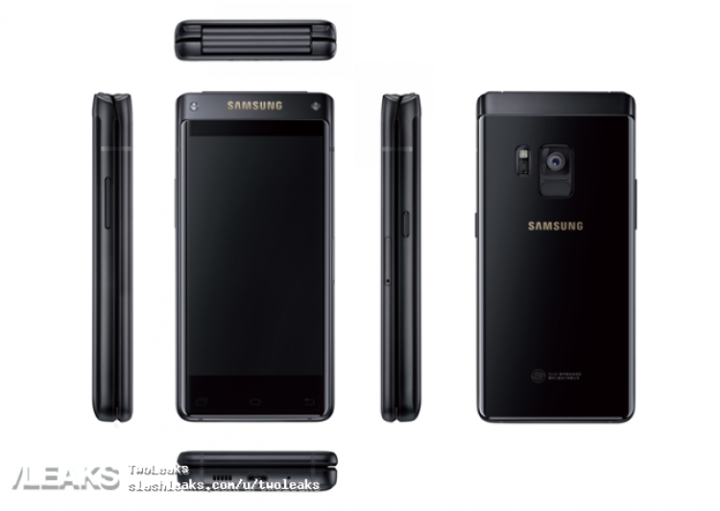 Flip-phones were a trend we all went crazy for not so long ago. Samsung has released modern day flip-phones in Korea, China and some other markets outside the US over the years. This definitely suggests that there are still some souls who consider the flip-phone as not so old fashioned as one might believe. Recently the company’s latest flip-phone got outed in full-on device renders. The phone has been codenamed SM-G9298 and it is very possible that it will be named W2018 as its predecessor was W2017.

The images of this particular phone came by way of a SlashLeaks user TwoLeaks. The photos pretty much provide us with everything we need to know about the SM-G9298. The phone comes with a 4.2-inch display with a Full HD resolution. It is also home to a 12MP rear camera and a fingerprint scanner. Both the inner and the outer side sport a touch screen. The outside display supports Samsung’s Always-On display. Once you open this iconic phone you will see the physical number pad from the more ‘primitive era’. A Microsoft Office suite appears on the home screen and there is a possibility that it could be pre-installed. Other details of the SM-G9298 include a Qualcomm Snapdragon 821 processor, 4GB of RAM, 64GB of internal storage, a 2,300 mAh battery, 5MP front-facing camera, and Android 6.0 Marshmallow.

The Western part of the world including the United States will never really accept the SM-G9298; a phone that is a clear indication of the bygone era. Despite such a major market not accepting the flip-phones, it is very interesting to see Samsung continuing to release high-end phones with this particular form.

Are you a fan of the flip-phone and would you want them back in your life? Or would you prefer the handy smartphone? Let us know what you think.