Lead and Gold, a game which I have been keeping a careful eye on for a very very long time, this is a 3rd person wild west shooter. Where just like other games now days you can play various classes each with great strengths and weaknesses. What held me back was lack of support for dedicated servers, and today the dedicated server support update has been released I believe in time this will be a GREAT competitor against Team Fortress 2. 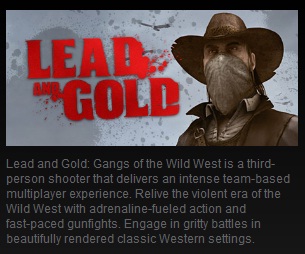 With achievements, steam cloud and a great online community this game is a definite buy for all you fans of online games out there, The game is not restricted to the PC but is also available on the Sony PlayStation 3 and the Microsoft XBOX 360. This is a great start for the game because Team Fortress 2 while being on the XBOX makes you pay for the free upgrades on PC for the classes using Microsoft points.

With an amazing price tag of a mere $15 this game has already caught my attention.

Lead and Gold: Gangs of the Wild West is a third-person shooter that delivers an intense team-based multiplayer experience. Relive the violent era of the Wild West with adrenaline-fueled action and fast-paced gunfights. Engage in gritty battles in beautifully rendered classic Western settings. Players will test their mettle in genre-specific game modes and levels tailor-made for satisfying team play.

Lead and Gold features the unique synergy system, which provides power-ups to encourage co-operation and team tactics. This system accentuates the frantic shooter and objective-oriented gameplay by rewarding players who focus on cooperation and play as a team.

* Four playable characters with different strengths and weaknesses, adding depth and variety
* A multitude of different game modes and settings, all with a distinct feeling of the Old West, providing increased longevity
* Lead and Gold: Gangs of the Wild West uses the synergy system to reward players that play as a team
* Game modes and mechanics are designed to be easy to understand

Here is a YouTube video demonstrating the various classes and their functions in the game.

With dedicated server support we can definitely expect the gamers population to rise. I for one am definitely buying the game for sure I am a huge fan of shooters and this might be the first online Third Person Shooter which actually got my attention.

To buy the game and for additional details go HERE

Stray Becomes the Best User-Rated Game of 2022 on Steam

Assassin’s Creed Liberation HD Has Been Delisted on Steam; Game Won’t Be Playable From September 1st