Jetpacks, Dinosaurs, Futuristic guns and Multiplayer; The Ultimate FPS Is Coming To You!

What do you get when you throw Dinosaurs, Jetpacks, and Futuristic guns and throw in a multiplayer mode in the mix too? You get Spiral Games upcoming video game called Orion: Dino Beatdown. The game is your not so typical FPS where human players must bring down these titanic beasts using Jetpacks and all manners of weaponry at their disposal, the only thing you should be careful is not to become Dino chow. 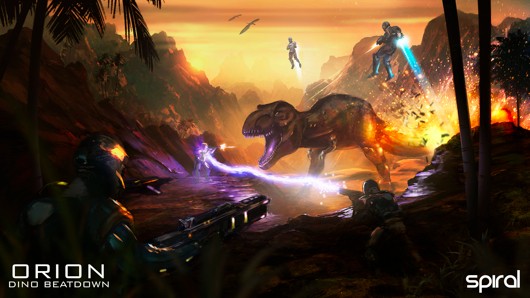 Spiral Game studios have been making Orion: Dino Beatdown for quite some time now and it’s about time for the game to see the light of day for all to play on the PC by Steam and OnLive. The game comes out on April 20th for the PC via Steam and OnLive for a mere $9.99, it will offer a 5-Player cooperative game mode where players have to take down hordes of dinosaurs. Think of it like Zombies from Call of Duty: World at War and Black Ops but with more futuristic weapons and Jetpacks and you will be in survival shooter heaven my friend.

As a fan of this kind of Genre I am really looking forward to this video game and hope that it delivers an unforgettable experience for my friends and I when we take the battle of human Vs. Dinosaurs across the interwebs.

Below is a trailer which should make the game clearer to you and help you decide whether the game is worth a day one purchase or not.