Apple has been annoyed by the hackers from the very first day when the iDevice was jailbroken and unlocked. The rift has continued to take exhilarating twists and turns and remains a bone of contention to date. Apple rolls out an update which is jailbroken and it is followed by another one to fix the previous issue but the hackers defy all security measures taken by Apple.

Exhausted by this fetter, Apple came up with something new. Instead of preventing users from jailbreaking it has instead devised a plan to “discourage” jailbreaking. The latest iOS 5 Beta 4 was the first one to allow OTA (directly over the internet) updates. 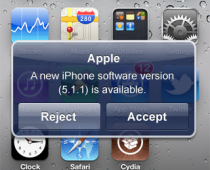 It was however revealed later that once you’ve jailbroken your device you are no longer able to receive over the air software updates by Apple that is you cannot update to the latest iOS version directly over the internet and you’ll have to do it the conventional way: plug your device into a Windows or Mac and use iTunes.

It is the same approach which was taken by Google when they launched their Android OS. In that case a modified OS failed to receive wireless updates. The process to bypass such obstruction is known as ‘rooting’ one’s phone in order to access the features which were not supported officially.

Irritated? Well there’s no need of getting infuriated. In a way it’s beneficial as there will be no chance of losing the modifications made to your device after jailbreaking and as people have been updating via iTunes since years, it won’t be something disturbing.