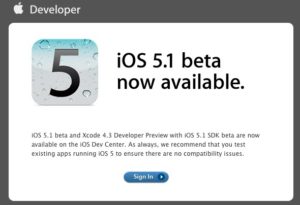 iOS 5.1 has been in beta for quite a while and rumors about its release date have been flying around in the past few weeks. The expected date of release is around March. Initially it was the 7th but now according to BGR iOS 5.1 will land on the 9th. It could be a stand alone release or it might be released along side iPad 3.

Previous x.1 releases have varied a bit in the amount of features they've brought to the table. iOS 5.1 will have a new lock screen which will allow for a faster camera access than what's currently on offer. A camera button will be placed infront of the unlock slider and users will be able to drag it up to reveal the view finder. This whole process shaves off a second or two compared to the current method of double clicking the home button. In addition to this Siri will now be able to speak Japanese