Today, Apple has started to release iOS 10.0.2 for iPhone, iPad and iPod Touch. iOS 10 was released not so long ago that brought a lot of new additions to the table. However, today marks the day for Apple's release of iOS 10.0.2 for all compatible iOS devices. Let's dive in to see what the new update has to offer and whether it brings any forward-facing features.

Apple's release of iOS 10.0.2 comes only one week after the release of iOS 10. It's not certain if the changes part of the upgrade are subtle or ground breaking. However, the update simply shows how the company is dedicated to fixing any issues that might prevail. So what's new in the iOS 10.0.2 update? Check out the complete changelog below. 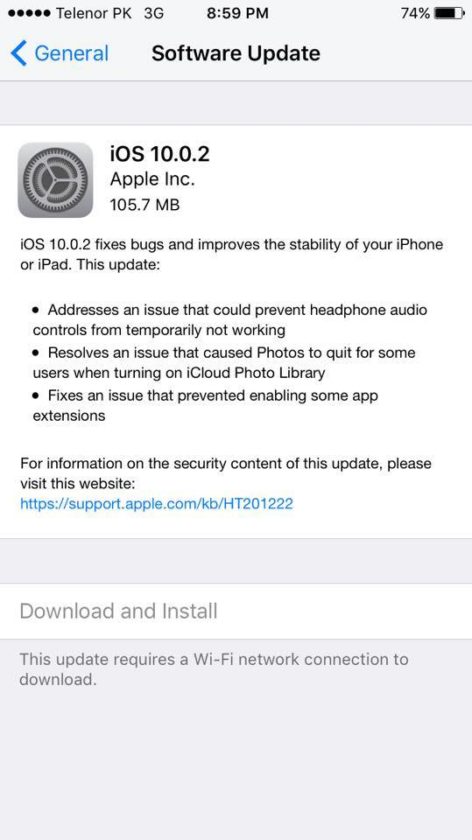 Since the update is the first one after the release of iOS 10, we cannot simply expect Apple to add major features just like that. As it can be seen, iOS 10.0.2 has been released with a handful of usual bug fixes and performance enhancement additions. This will ensure the adequate working of the firmware as it was intended. As you can see, the update also carries fix of the headphone audio issue that stopped temporarily. Other than this, enabling app extensions have also been fixed. So, if you're experiencing one of the issues after updating to iOS 10, this update might resolve it.

iOS 10.0.2 is now available to download via an OTA update. If you're interested in downloading it right away, simply head to Settings > General > Software Update and then just download. However, if you have fear of installing a corrupt OTA build then you can simply do it via the IPSW file which is relevant to your specific iOS device. The IPSW file can conjoin with the latest version of iTunes and then install iOS 10.0.2 onto the connected device. Below is the list of devices with their compatible IPSW file links. Be sure to download the one that is compatible with your device.