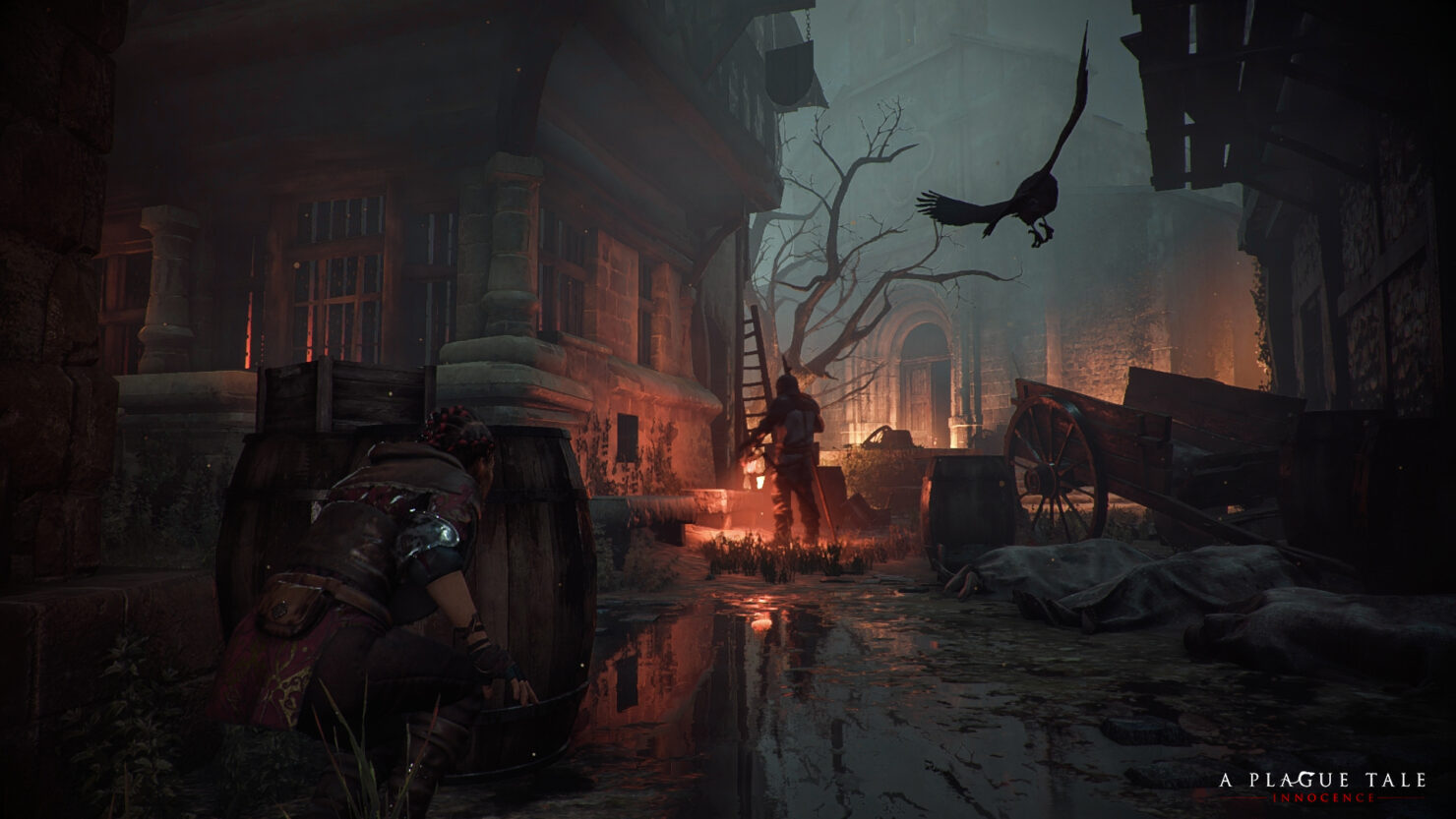 You may not have heard of the recently announced A Plague Tale: Innocence, but it might be worth keeping an eye on, if for no other reason than to make sure it doesn't bite at your heel. It's a game set in a Medieval France that has been overrun with murderous rats and killer inquisitors. You play as a young girl trying to keep her and her brother safe during these very dangerous times. We caught up with a producer from developer Asobo to ask about the game, and what is with all the creepy rats.

What made you decide to do a game with such a focus on rats?

We wanted to have a game with a hard period to live in for our characters. So when we looked back at the history, we thought the medieval time was perfect in terms of what happened. There was a war between the English and French, one of the thousand wars we had together, and there was the arrival of the Black Plague in Europe. There was the reaction of the Church and the Inquisition. Everything was set up to be awful.

And when you look at the paintings of the time by the Church, there was this representation of the flow of rats and the rotten flesh. The Black Plague was the worst nightmare, maybe a punishment for the sins of the humans.

It was definitely a place we wanted to set our game in because we are sadistic. We loved the black plague idea and we asked what was the most common depiction of the plague and it was the rats. And we started to think we could play the rats with the light. It was almost obvious.

I know it’s not the case in real life that rats can’t go into the light, but it sort of makes sense. It is an interesting setting because if you take this mechanic and you have this light coming in from, let’s say, the window, and if you close the shutters the rats come in. There are lots of ways to play with it. 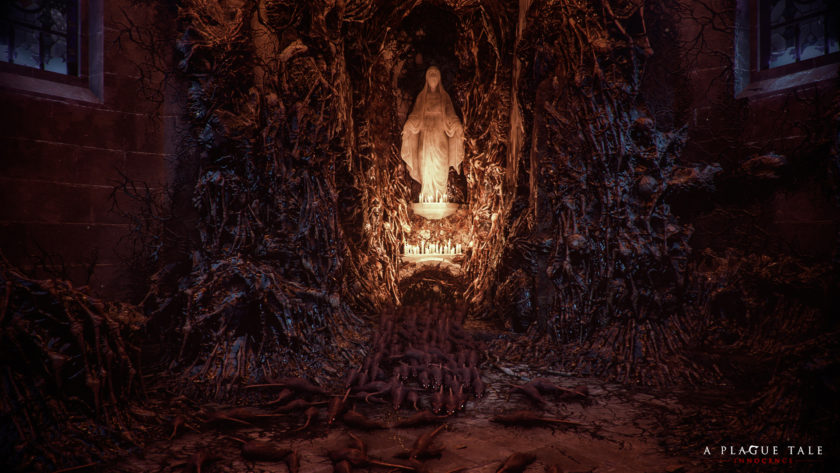 It’s clear how much effort you put into the rats. How long did it take you with the sound design alone?

It took a long time to get the sound for the rats. It had to be a lot but not too much and sometimes I think we can still go a bit further because you don’t hear the rats falling from everywhere and it's not really emphasized by the sound. So it’s a long procedure.

What is the basic story of A Plague Tale: Innocence?

So there are two noble children whose parents are killed at the beginning of the game. These children aren’t trying to find out why or get revenge, though, they’re just trying to survive. They don’t have a deep plan. They are told to go find someone, that this person is the only one they can trust and the journey starts there.

We don’t want to have a super child with a big plan. It's not credible. The children are trying to think in the moment, they’re not trying to build a castle and make defenses. At the very beginning at least they are reacting to events rather than causing them. Maybe at some point, they decide to stop running but that would be later on.

Talk a bit abut the setting.

It’s going to take place in France. Though they will move around a bit it will be around the southwest of France. They will have a journey but with the rats and the Inquisition on all the roads, they won’t be able to move far away. As well they are only children from sheltered upbringing, and they don’t know other places every well.

So the two main antagonists in the game are the Inquisition and the rats. Can you pit them against each other?

So we’ve built it as a triangular structure, you have the rats, the humans and the light. Those three things work with each other. If you go by day that means you’ll only have rats in shadowy places or inside, so you can’t use the rats against the inquisition. In the opposite direction if you go by night the guards can barely see you, but you have rats. You can take the light to defend yourself but then the guards can see you.

In the worst case scenario, you have rain where you have no fire at all. Sometimes you can attract guards to some places because the Inquisition has some ways to exterminate the rats. So sometimes you will need to use them to get past the rats and sometimes it’s the other way. You have to use them in both ways.

Is there a supernatural element at all in the game?

It is more of a question of perception, and how the child perceives the world versus how adults view the world. You are a child in the game so you are seeing the events through the eyes of a child. What they can see can be nightmarish and is far beyond the capacity of understanding for adults. Children can leave this sheltered lives and barely understand the world outside. They don’t know about the plague, about the war, they don’t know about the cruelty of the war.

The children you play as in Plague Tale are nobility, they lived in a small paradise and the whole world has shifted for them, and now all the see is violence. So their perception of the world and how the events unfold will shift throughout the game. 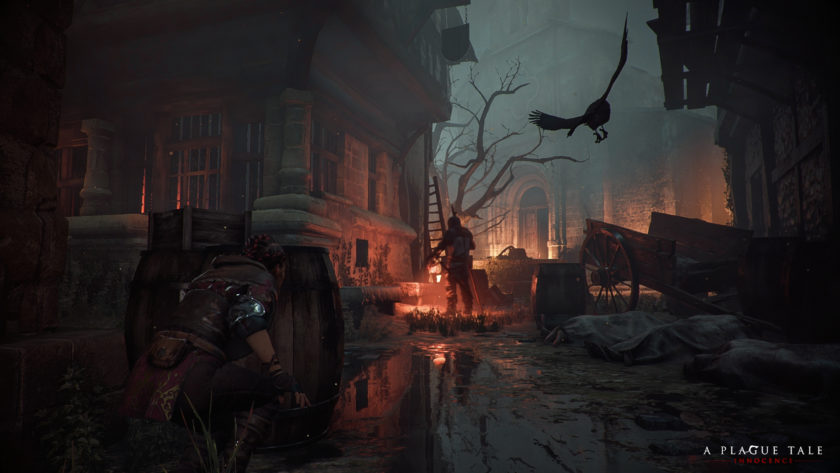 With the main character being a child, will she be able to fight the Inquisition?

She has her slingshot, that she can use to interact with the enemies and the world at large. She can destroy Inquisition lanterns so the rats can kill them, or knock over coals to create fire for instance. And her sling will have upgrades. So there will be different ways to use it and different ammo to use that will give her different approaches to situations. She won’t have any crossbow or swords or anything.

I’m a fully grown man and I couldn’t lift a medieval sword, so maybe there will be more but she won’t be a little knight.

How long do you think A Plague Tale: Innocence will be once it's finished?

Between ten and twelve hours. And it’s going to be a linear game. We really wanted to focus on the narrative and keep developing them in a very linear way. You’ll still have multiple approaches to each situation as much as possible, but it will still be a linear game.

The game focuses on siblings, so will the brother be a constant companion?

It is something we are still discussing because we want to create a balance and we need a lot of interesting play. It can be complicated and hard to balance and if it is just giving him the occasional stupid order it won’t be fun.

The relationship will be a major factor in the game and they will both be able to different things from each other. They will need each other.

Are you thinking of having multiple endings?

We are thinking of having only one good ending at the minute because we are having some very good endings at the minute. We prefer to have a solid story and to do it well we will need to focus on one very good story. We have so much to say about those characters that we don’t think it can be told effectively in multiple endings right now. We have a long story to tell.

I don’t know if that will change. A Plague Tale: Innocence doesn’t come out until 2018 so that might not be what we decide at the end, but for now we are only looking at the one ending. 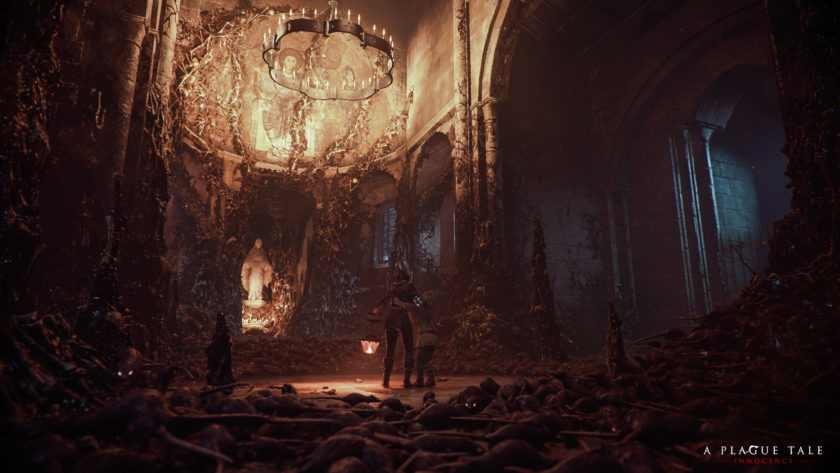 How will you build the world of A Plague Tale?

So it's very important for us to encourage the players to explore. You can observe people talking which will help us build a credible world and it’s the sort of thing that makes players think that there is a story there. So we are trying to do that as much as possible.

But it's hard because some people play the game just for the game itself, but without context it sometimes doesn’t make sense. Without it, the game wouldn’t feel as accurate and we really to craft this world to be perfectly credible.

Are you planning on doing anything with the PS4 Pro or the Xbox Scorpio?

To be honest it’s a discussion we haven’t started yet. We’ve been building on the PC version and we are trying to do everything to be 4K ready and everything. So we have the foundation there and when it's time why wouldn’t we use everything to make the game as good as possible? But for now we are focusing on the PC and once the quality is there for PC we will start adjusting for console and talk about implementing something for Pro and Scorpio then.

The game is called A Plague Tale: Innocence. What are the chances of this becoming a series?

I hope so. We are going to see how it goes. For now, we are focusing on this one and it’s a big deal for us. We haven’t made this kind of game ever and for us the universe is really big and people have had a really big reaction to it. I know the publisher are really enthusiastic about it so if we can explore the universe, of course we will.

Pathologic 2 Review – Driving You To Madness