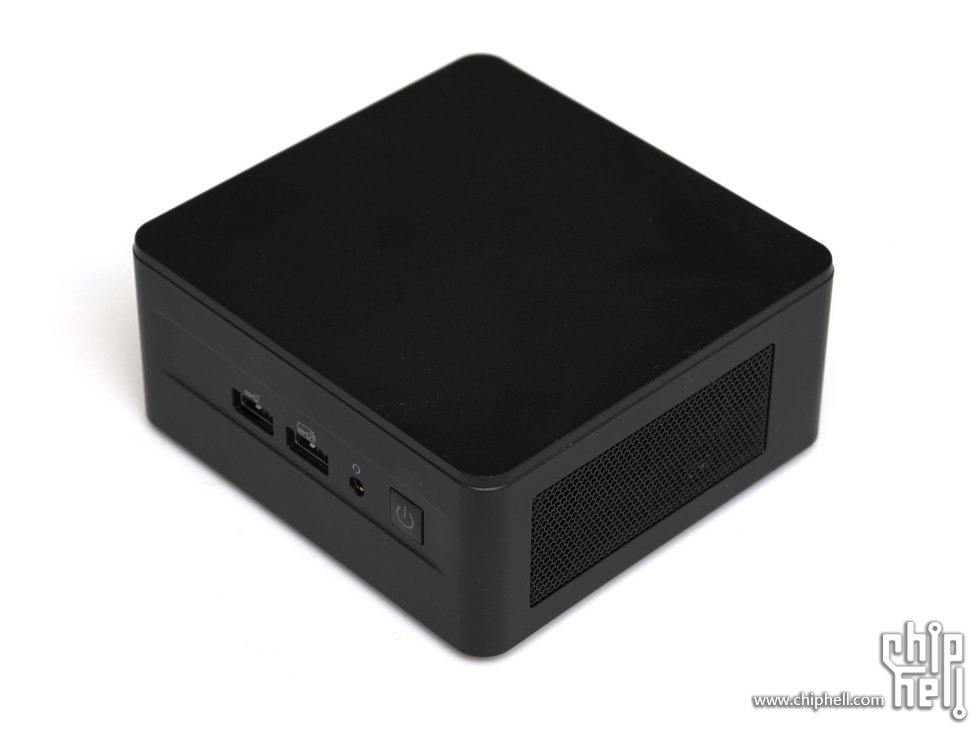 Someone's Vest, a Chiphell user, unearthed photos and benchmarks of a not-yet-released Intel NUC system that an Alder Lake-P processor powers. The name given to this new system is the Intel NUC Studio 12 Pro, also known as "Wall Street Canyon," which would signal that Intel plans to compete with Apple and their Mac Studio release. While these photos and benchmarks have yet to be fully confirmed by Intel, it is interesting that the company is looking to take some of the spotlights from Apple.

The source on Chiphell discusses in length the new system, noting that it copies the similar NUC 4 x 4 design, keeping the ports parallel with the previous NUC 11 system. The front shows two USB 3.2 Gen2 ports, reaching data speeds of 10 Gbps, and a single audio jack. The power adapter is upgraded from the NUC 11 systems, offering more length but lacking a GaN technology-based power supply unit. If this system is indeed planned to release in the future, it would have the space for a 2.5-inch SATA drive inside the chassis.

On the inside of the unreleased NUC Studio 12 Pro, one of five Alder Lake processors is mentioned to be available:

Readers will note that the Intel Core i3-1220P offers a 10C/12T core but only offers the ability for  Intel UHD graphics qualities. All processors' base power is around 28W with a boost clock of 64W.

For benchmark tests, Someone's Vest on Chiphell used an ES, or engineering sample, chip, hinting that the performance would closely resemble the newer NUC 12 generation.

In the Cinebench test, the Intel Core i7-1260P equaled dominancy against the Intel Core i5-12400 processor. In contrast, the Intel Iris Xe graphics, which are integrated, show similar results to previous generational tests and do not show any significant changes.

The CPU-Z tests show that the Core i7-1260P performed 25% above the previous generation in single-thread testing and doubled the performance in multithread testing.

The biggest surprise to Someone's Vest was that the noise of the NUC Studio 12 Pro's cooling module was greatly reduced, commenting that the new NUC system has "greatly improved" its design for silence.

Compact workstations appear to benefit the NUC Studio 12 Pro, but without enough hard evidence, we will have to wait for official word from Intel on the new Apple competitor.