Intel has finally unleashed a sub-10nm (officially the Intel 7 process, which is comparable to TSMC 7nm) desktop CPU with its Alder Lake processors and the company’s multi-year slippage at 14nm is officially over. The Alder Lake architecture also features a plethora of innovative changes including a hybrid architecture with big.SMALL design feature p and e-cores as well as a new hardware scheduling technology that will go live in Windows 11. 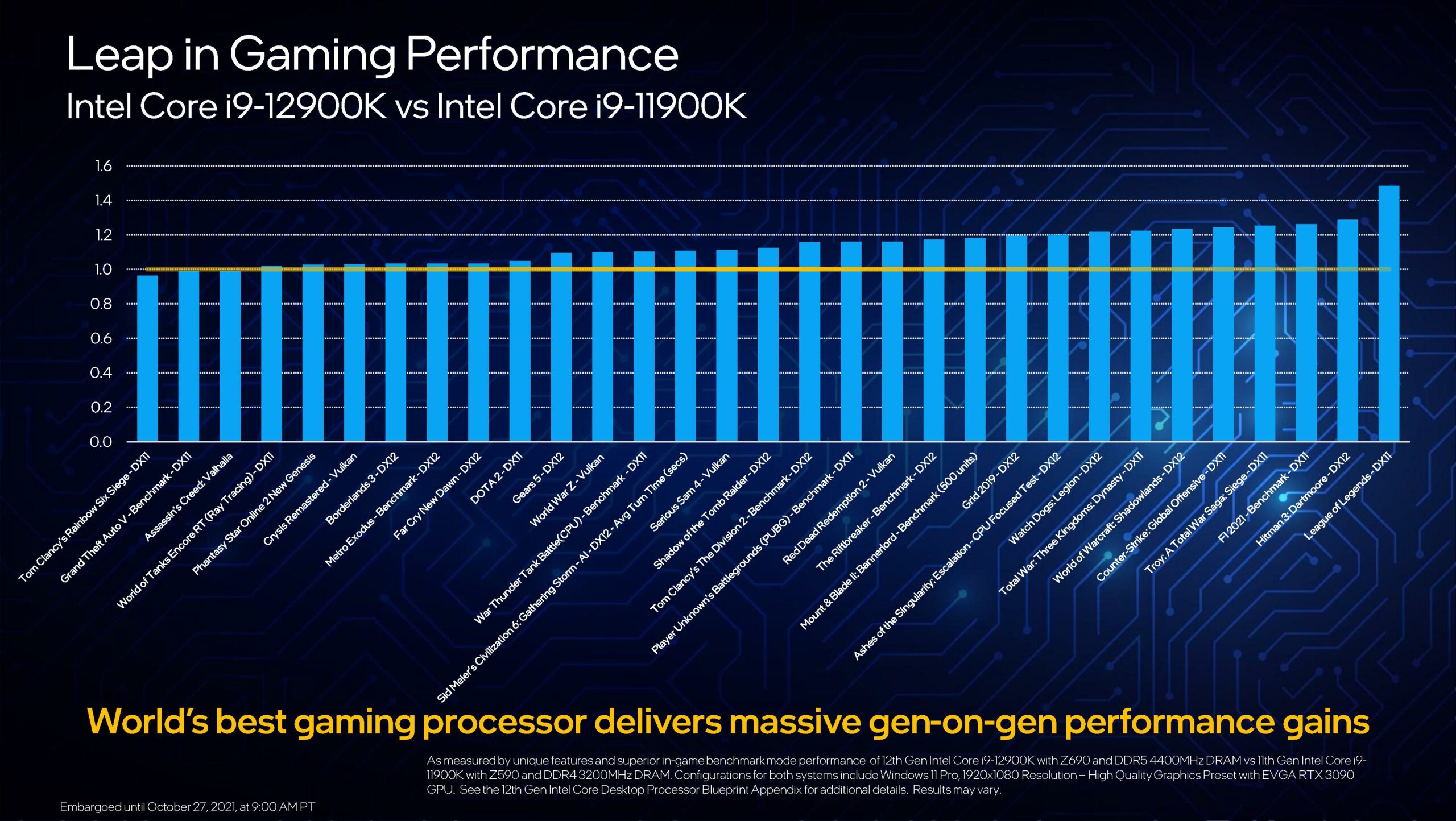 Intel has also managed to deliver 19% IPC increase at ISO frequency over the previous 10th generation Rocket Lake parts and we are noting an improvement of almost 50% when you take into account multi-threaded performance in benchmarks. Alder Lake also features Intel Smart Cache architecture which will share the L3 cache with the p and e cores. Apart from this, the company is the first to market with DDR5 memory and PCIe 5.0.

Single-threaded fixed frequency performance is up by 28% (if you look at the p-cores) and up by 50%, if you look at multi-threaded runs. All of this happens with Alder Lake consuming 9 watts less than the Core i9 11900k. One minor change, however, is that the PL1 and PL2 are now the same, meaning the TDP of the Core i9 12900k is effectively 241 watts by default.

Intel has decided to go with extremely aggressive pricing for its Alder Lake lineup. The flagship Intel Core i9 12900k will be sold for $589 which is very competitive with the AMD Ryzen 5900X (which retails for $550). The Core i7 12700K will retail for $409 and the Intel Core i5 12600k will retail for just $289. Considering the Core i5 part is an extremely capable SKU with 10 cores, this is competitive pricing by Intel and if they can deliver on supply, should sell like hot cakes.

Alder Lake will be fully scalable from Desktop (LGA1700) to ultra mobile. Interestingly however, while the platform has 8 P-cores and 8 E-cores, only the P-cores will support hyper threading making for a total of 24 threads available. The integrated GPU will have 96 EUs of Xe architecture (good but nothing to write home about) but the thing that impressed us the most was the fact that Intel is claiming a 19% IPC uplift over Rocketlake – which should handily beat AMD parts if true.

Alder Lake will feature up to 30 MB of non inclusive LL Cache and support DDR5-4800, LP5-5200 along with DDR4-3200 and LP4x-4266. It will also support two times the PCIe bandwidth thanks to its support of PCIe 5 and will be able to provide up to 16 lanes of PCIe Gen5 with up to 64 GB/s. The new design is fully modular and built like lego and should be completely scalable and flexible. The compute fabric interconnect has a bandwidth of 1000 GB/s while the IO fabric has a BW of 64 GB/s. The memory subsystem supports up to 204 GB/s but more importantly can scale memory frequency (and power) according to the need of the SoC