Intel, today, has launched a brand new server GPU called the H3C XG310 which features four Xe LP-based GPUs each coupled with 8GB of LPDDR4 vRAM (for a total of 32GB LPDDR4 memory onboard). The GPU is now-shipping and already has two design wins in Chinese streaming giants Tencent and Unitus. This would be the company's first commercial product in the enterprise sector that has come out of its GPU venture.

The Intel H3C XG310 GPU (wow that is an unfortunate naming scheme) can be used in a 4-way configuration with four cards running together (for a total of 16 GPUs and 128 GB LPDDR4 usable vRAM). The server GPU is combined with Intel's Xeon processors and while it runs with the current Cascade Lake series, Intel highly encourages customers to wait for the Ice Lake offering coming next year. Each individual GPU on the H3C XG310 features a 128-bit wide pipeline.

The Intel Server GPU is based on Xe-LP microarchitecture, Intel’s most energy-efficient graphics architecture, offering a low-power, discrete system-on-chip design, with a 128-bit pipeline and 8GB of dedicated onboard low-power DDR4 memory.

By using Intel Server GPUs alongside Intel Xeon Scalable processors, service providers can scale graphics capacity separately from the server count, supporting larger numbers of streams and subscribers per system, while still achieving low TCO. Packaging together four Intel Server GPUs in H3C’s three-quarter-length, full-height x16 PCIe Gen 3.0 add-in card can support more than 100 simultaneous Android cloud gaming users in a typical two-card system and up to 160 simultaneous users, depending on the specific game title and server configuration. Developers can leverage the common API in today’s Media SDK, which will be incorporated into the oneAPI Video Processing Library next year. Intel is working with various software and services partners, including Gamestream, Tencent Games and Ubitus, to bring the Intel Server GPU to market.

The Xe-LP-based Intel Server GPU is now shipping. Along with the recently introduced Intel Iris® Xe MAX graphics, the GPU will improve the visual computing experience for users around the world as Intel ramps its Xe architecture products and software initiatives.

One particular use case that truly showcases the power of using multiple GPUs on a single card is cloud gaming. One Intel Server GPU (H3C XG310) can stream up to 60 resource-intensive android games  (or up to 90 light-weight ones) at 720p 30 fps. Up to the theoretical limit of 4 cards, this becomes a maximum of 240 android games being streamed per configuration - which is a very impressive total and according to Intel, constitutes a lower TCO (total cost of ownership) than NVIDIA-based solutions - primarily due to the synergy between Intel Xeon and Intel Server GPU. 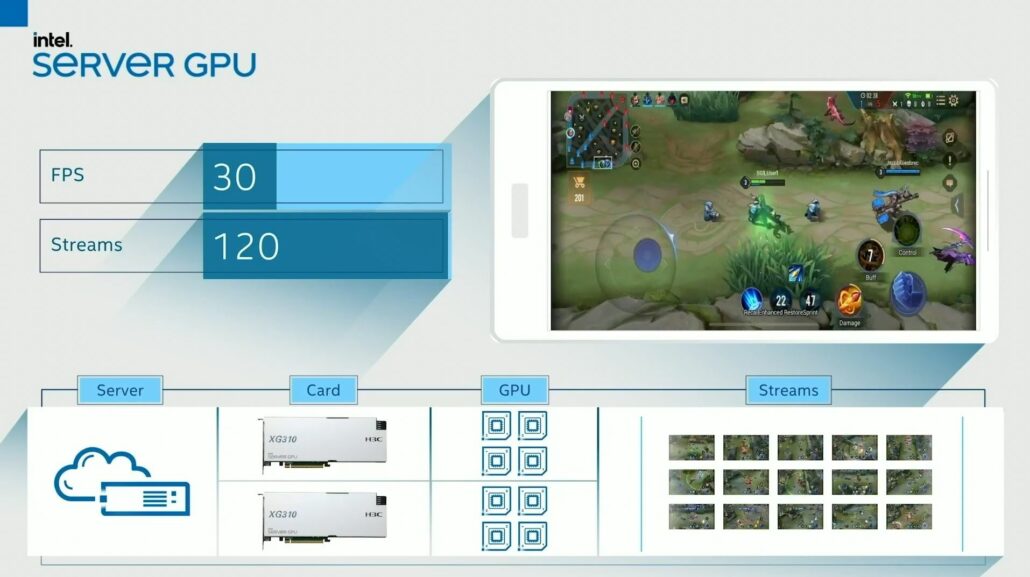 The company also announced that it had at least two major design wins for its server GPUs that are shipping as of right now. This includes Tencent Games, which cited the Intel H3C XG310 GPU as being a high density, low latency, low power and low TCO solution that they are using to generate 100 game instances on a 2 card server (50 per card).

And since we know our readers love high resolution renders so much, here is every angle of the Intel Server GPU (complete with a backplate!):