Intel's Sapphire Rapids-SP Xeon Platinum CPUs that leaked out yesterday have now been tested in a range of benchmarks but fail to impress when compared to AMD's EPYC & even older Intel Xeon chips.

In yesterday's leak, we reported how the latest Intel Sapphire Rapids-SP Xeon Platinum CPUs in ES state consume 350W of power at PL1 and 420W of power at PL2 limits. The CPU itself, which is a Xeon Platinum 8476 or Xeon Platinum 8480, is a 56 core part with 112 threads based on the Golden Cove core architecture, & and comes with 112 MB of L2 & 105 MB of L3 cache, and features clock speeds of up to 3.7 GHz (3.3 GHz all-core). Now, these aren't the final clocks but the power figures are definitely worrisome for Intel's upcoming part. 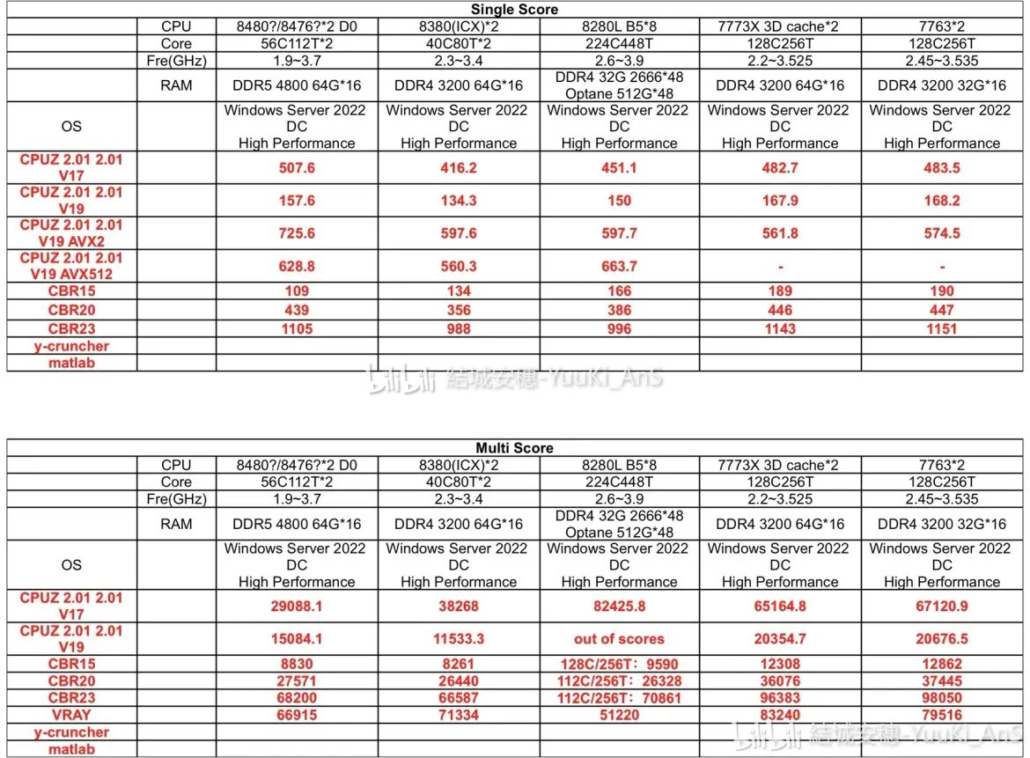 As for the benchmarks, In single-core, the Intel Sapphire Rapids-SP CPU did show a little boost over the Ice Lake-SP chips but was beaten by AMD's EPYC Milan parts in 4 out of 6 benchmarks. Despite the new Golden Cove architecture, the CPU was only able to match the Zen 3 server chips in 1T CPU benches. In multi-threaded benchmarks, the AMD EPYC Milan lineup destroyed the Intel Sapphire Rapids-SP chips outright. Just for comparison's sake, in CPU-z, the AMD EPYC Milan CPU ran at up to 2.3x faster performance than the unreleased Intel chip.

Interestingly, the CPU does deliver much higher performance in the CPU-z AVX-512 tests but we know that AVX-512 makes the CPU consume way more power and that could lead to power figures nearing the 700-750W BIOS limit. This is also why the AVX-512 clock speeds are rated much lower due to their intensity on each individual core. AVX-512 has been used in the past by Intel to inflate their benchmark numbers and while there are certain HPC workloads where the tech is useful, it isn't widely adopted and as such, non-AVX-512 workloads will benefit from standard core compute performance more.

Although this is an ES chip and we expect performance to improve significantly for the Sapphire Rapids-SP chip in the QS state, the final chip may still be only competitive against AMD's EPYC Milan parts while it will be launching at the same time when AMD will come out guns blazing with its next-generation EPYC Genoa 7004 CPUs. With such high power draw and not enough performance at hand, it looks like Intel will be getting a serious beating in the server segment by AMD, something that has been the case over the past few generations.