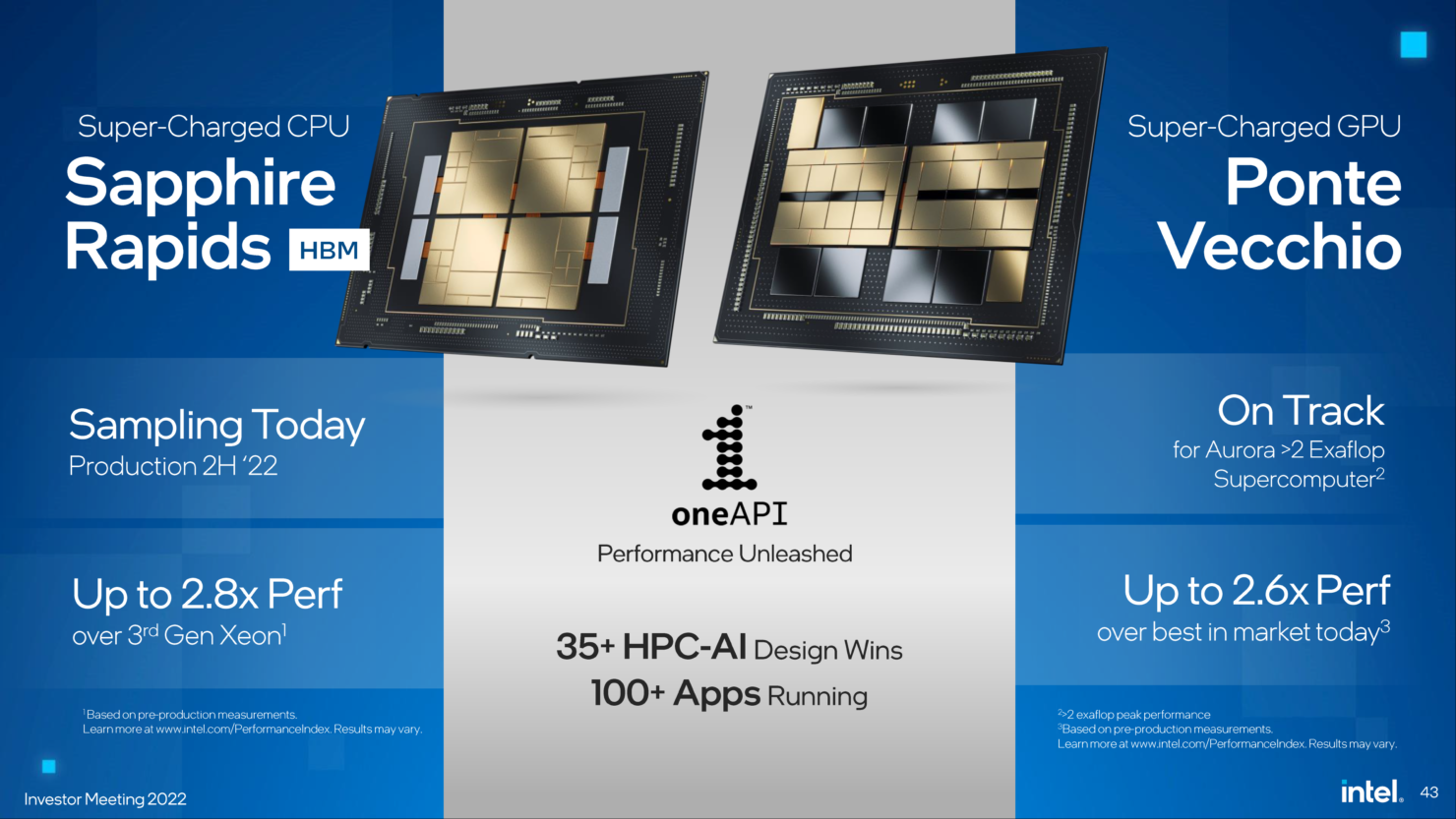 In the performance slide shown by Intel, the company compares its upcoming Sapphire Rapids-SP Xeon CPUs with HBM to its older Ice Lake Xeon Scalable chips and AMD's EPYC Milan/Milan-X CPUs. The workload used here was the OpenFOAM benchmark, specifically the Computational Fluid Dynamics test. Intel states that this benchmark was running on a pre-production Sapphire Rapids chip so final performance numbers may vary.

Watch Intel’s Sapphire Rapids with High Bandwidth Memory outperform the competition by up to 2.8x in computational fluid dynamics workloads.

In the benchmark, the Sapphire Rapids-SP non-HBM solution offers up to 60% higher performance than Ice Lake-SP while the HBM Xeon solution offers up to 180% performance increase. The same is true when comparing the chip to AMD's EPYC Milan lineup. Versus the standard Milan, the new Sapphire Rapids-SP chip should offer up to a 180% performance increase and a 150% increase over the recently launched Milan-X lineup. Unfortunately, this is just one performance metric and Intel hasn't disclosed the test apparatus. It is likely that this workload has an advantage for the Intel chip lineup. 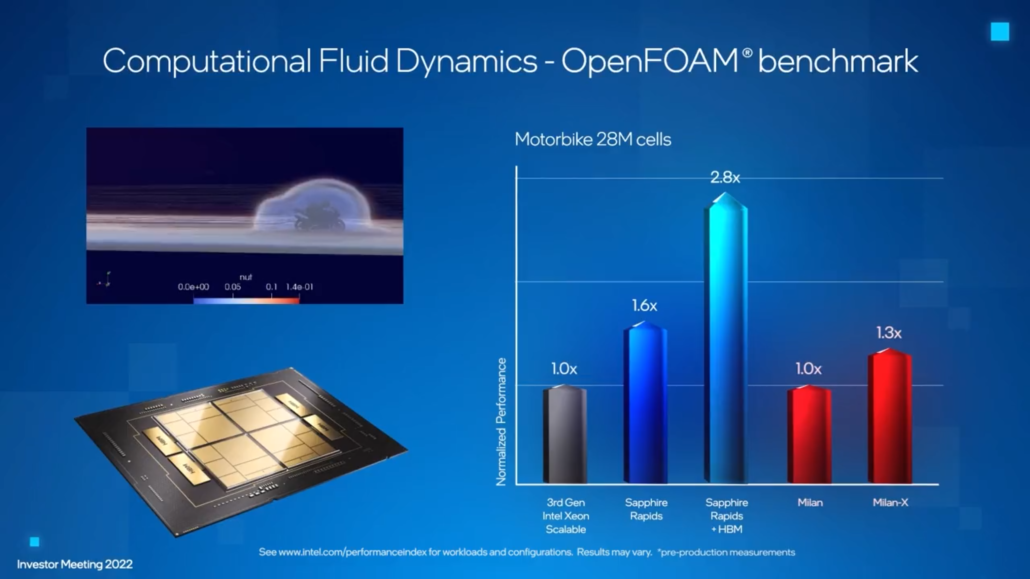 Super Compute Roadmap and Strategy – More than 85 percent of the world’s supercomputers run on Intel Xeon processors. Building on this foundation, AXG is extending to higher compute and memory bandwidth and will deliver a leadership CPU and GPU roadmap to power high-performance computing (HPC) and AI workloads. To date, Intel expects more than 35 HPC-AI design wins from top OEMs and CSPs. Additionally, AXG has set a course that paves the way to zetta-scale by 2027.

Our Ponte Vecchio GPU is designed to take on the most challenging AI and #HPC workloads. Even on pre-production units and early software, #PonteVecchio pushes the bar higher than the competition! https://t.co/axspq8Kpr8 pic.twitter.com/kOUMA1jex4

Intel also compared the performance of its Ponte Vecchio GPU which should offer up to 160% performance increase versus competing solutions from NVIDIA (Ampere A100). The benchmark used here was the Financial Services workload measurements. Once again, no specific have been provided for this benchmark either. 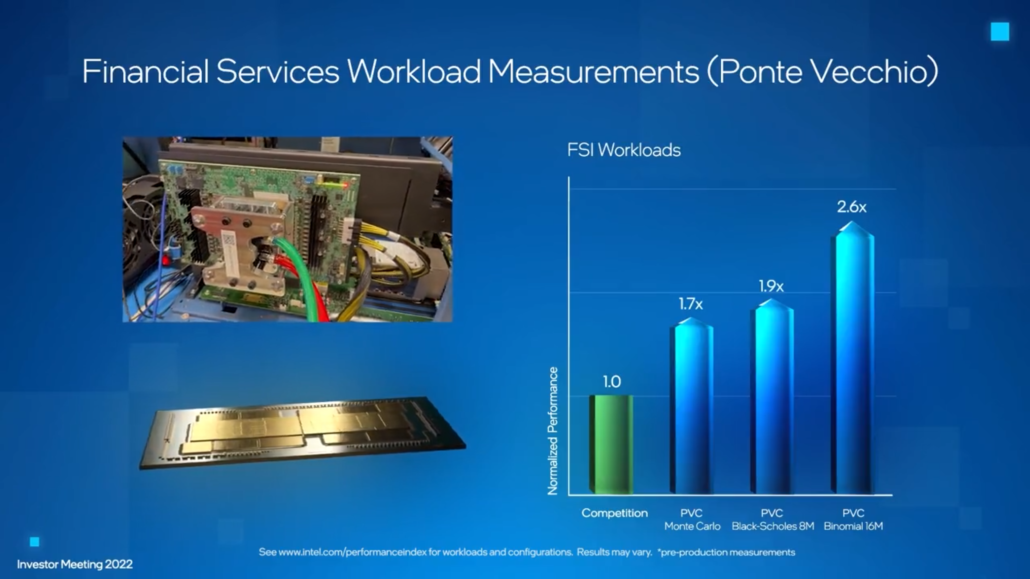 While Intel Sapphire Rapids-SP Xeon CPU looks quite good in these benchmarks, especially in its pre-production state, we have to remember that the lineup will be competing against AMD's EPYC Genoa by the time it launches and not EPYC Milan-X so team red would still have a major advantage over team blue. The Ponte Vecchio GPU will be competing against NVIDIA's Hopper and AMD's Instinct Mi200 class GPUs.