Since Rocket Lake is a new architecture designed for the desktop CPU segment, it will take time to mature. We know from our sources that Intel is still working on its micro update internally and has yet to supply motherboard makers with the latest version to ready their respective BIOS firmware. As such, the performance leaks that we have seen so far are not showcasing the end performance that the 11th Gen Desktop lineup has to offer. However, a few board makers have recently started to evaluate a new BIOS which offers slightly better performance.

I have to clarify an important point here. I forgot to mention this. Sorry!

According to CapFrameX, the performance results for Intel's Core i7-11700K were done on the new BIOS on a Z590 motherboard platform. The test platform included the GeForce RTX 3090 & 32 GB of DDR4 memory for each platform. The Rocket Lake platform was tested with DDR4-3200 MHz (CL 16-16-16-36 2T) 4X Single-Rank memory while the Comet Lake platform was tested with DDR4-2933 (CL16-16-16-36 2T) 2X Dual-Rank memory. These are the native DDR4 spec supported by each CPU platform and while Rocket Lake was using higher clocked memory, it is relying on single-rank DRAM which should be on par with dual-rank DRAM on Comet Lake.

So coming to the benchmarks, only three titles were tested which include Crysis Remastered, Star Wars: Jedi Fallen Order, and Cyberpunk 2077. The test settings and resolution are not mentioned. In Crysis Remastered, the Intel Core i7-11700K shows a 6% performance improvement over the i9-10900K. In Cyberpunk 2077, the chip shows a 2% performance difference. Lastly, in Star Wars: Jedi Fallen Order, the Rocket Lake CPU is 10% faster than the Comet Lake CPU. This is an overall gain of 6% over the last-generation flagship. 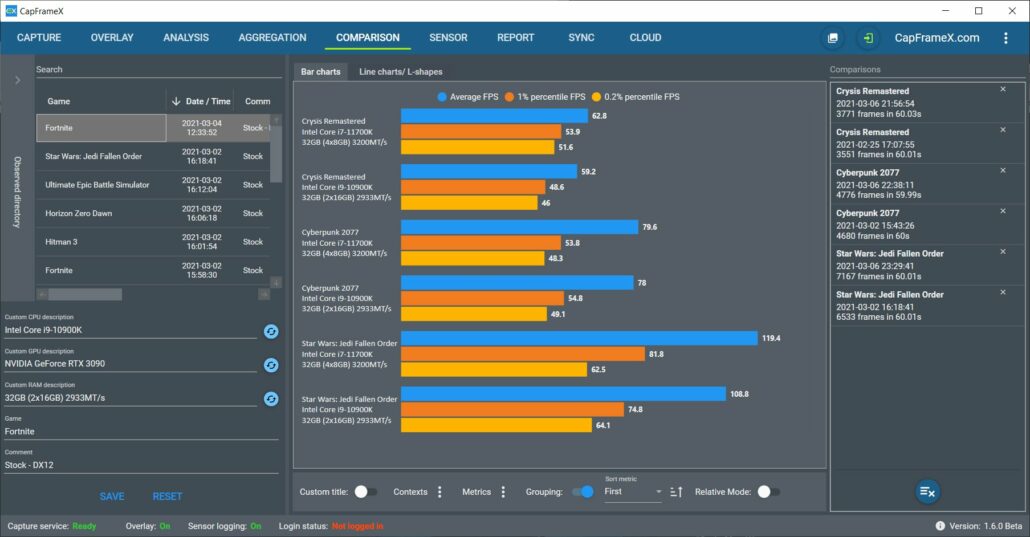 Do note that the Intel Core i9-10900K has a higher number of core/threads than the i7-11700K & also operates at a higher boost frequency of up to 5.3 GHz. The Rocket Lake CPU maxes out at 5.0 GHz while the Core i9-11900K should boost up to 5.3 GHz and offer a bigger performance increase versus the Core i7 model. If Intel can tweak the performance and get a 10% performance gain by the time Rocket Lake launches (30th of March), then it would definitely be a good choice but not a great choice for gamers. We have already seen reports of the chip running very hot and consuming lots of power, even without AVX-512 loaded, in several leaked benchmarks.

If Intel can manage to price the Core i7-11700K and the rest of the stack right, then it might have a chance against the Ryzen 5000 'Zen 3' CPUs in terms of price to performance values otherwise, AMD just needs to keep up its supply running smoothly and that would be enough for users to not have second thoughts about moving to Intel, at least till the next-generation Zen 4 and Alder Lake CPUs arrive.