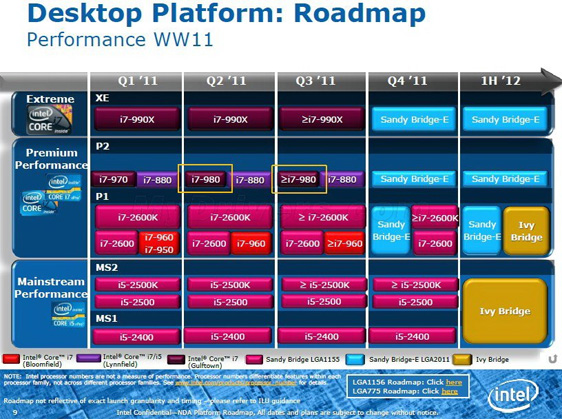 A new Intel Roadmap has been leaked on the net which gives some interesting details on the upcoming Enthusiast Platform Sandy Bridge - E along with Ivy Bridge and Pentium/Celeron based processors which intel plans to release till the first half of 2011.

According to the roadmap, The High end Sandy Bridge - E will be launched in Q4 2011 while the later CPU's and Ivy Bridge platform will pop up by 1H 2012 or in Early March 2012. The Main advantage of Sandy Bridge - E  over the current Sandy Bridge Maho Bay/Sugar Bay and Ivy Bridge would be support for graphics cards with 16 lanes, the new quad-channel interface with the base R and 2011 contact surfaces, and of course more L3 cache along with more CPU cores and threads. 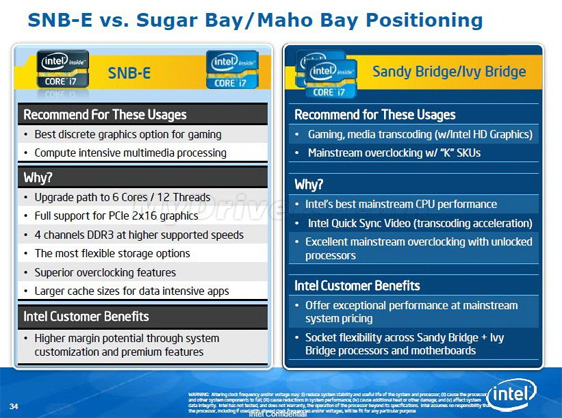 One interesting thing is that Intel has only listed the 6 cores and 12 thread variant of the Sandy Bridge - E CPU's while four to eight cores variants also exist however Intel maybe targeting those CPU's toward the server segment and would release them for desktop usage when required.

The roadmaps also indicate in which category would the processors be priced, According to it "Premium P1" would be the cheapest Sandy Bridge - E CPU and will be priced the same as a Core i7 2600K/i7 2600 making it go for a max 250 € price. The specs are not yet confirmed but it is likely to be a quad core with the lack of a GPU core due to which it may offer a slightly higher clock speed than the current models along with a larger L3 Cache and Memory Interface. The other "Premium P2" range would likely be a Six Core model and would be the successor to the current six core based models and would be priced at for 480 €. However this segment would have to compete with AMD's bulldozer based Zambezi platform which is bound to release within a few months. To compete with it, Intel can also bring cheaper sic core based models for 250 euros with lower clocks in the market. 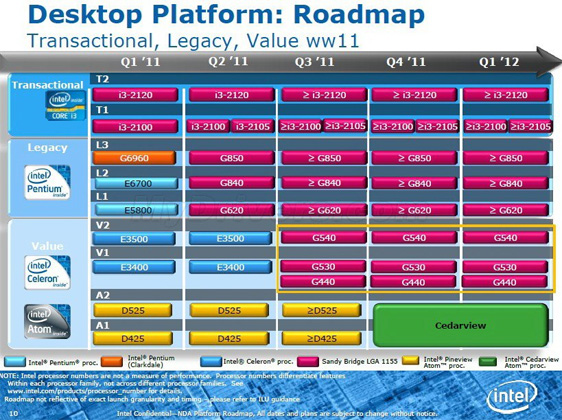 Ivy bridge would be getting faster models or we call them successors to the current Core and Core i7-2600K-2500K i5 which would offer a few more Mhz but would be priced the same. There will also be a Core i7 980 which should not be mistaken with the 980X Extreme Edition. Similar to the i7 970 it would be the smallest six core CPU, Although price would be same as the i7 979 but will work at 133mhz faster.

Last up is the atom based family "Cedar View" which Intel will release by Q4 2011and is a 32nm based chip. Intel will details it in the next IDF. The Atom based processors will compete against AMDs Brazos platform in the notebook segment.